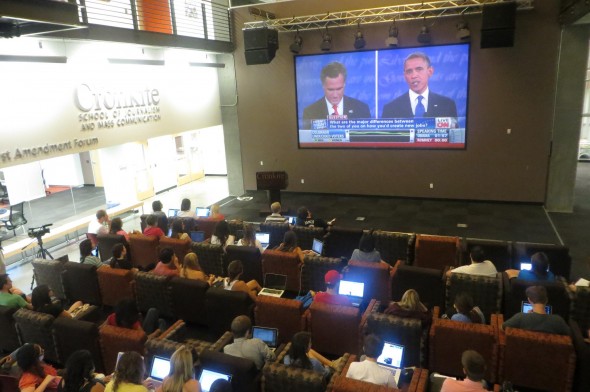 Democracy is in its baby stage in my country. There was an attempt of pre election debate between the ruling and opposition parties in the 2005 election, which was successful in galvanizing people to go out and vote. As a post graduate student of journalism, I was an election observer and had been moving from station to another in the southern part of Ethiopia. On the Election Day, people were telling me how they had started to line up as early as four in the morning to cast their ballot. The heavy rains and muddy roads didn’t stop them. They were eager to taste the new emerging democracy. Unfortunately that election ended in bloodshed. The vibrant pre-election debate we had seen remained just a memory.

I think this is perfect time for me to be in the US. What is better than witnessing working democracy inside and up-close?  One thing that I noticed here is that not many people are interested in voting. It is a pity to have a kind of election that many countries envy and not taking advantage of it, especially  in a swing state, where voting appears to be more meaningful.

Four years ago, I had been following the US presidential election mainly from my sister and my father, who were passionately talking about Obama. However, I did not miss the electrifying speech that he gave when he took office. I don’t recall the content, but I remember being moved listening to him and watching people’s reaction all over the world. Surely he is one of the few inspiring leaders, who are able to speak to all nations. We have plenty of businesses and probably children named after Obama following that.

I began paying attention to the 2012 election starting from the conventions last month.  It is very interesting to see how both Democrats and Republicans passionately address the American public, battling on a level playing field. I know it is going to take long before I see something like that in my country.

My sister, big Obama fan was not so impressed by his convention speech, but I kind of liked his practical approach urging his people to make informed decision. The last four years, has clearly changed Obama.  He said that himself “You know, I recognize that times have changed since I first spoke to this convention. Times have changed, and so have I.”  Now I am interested to know what has really changed.

Nobody underestimate the weight of being a president of any nation. The responsibility and stress is enough to give generous grey hairs and wrinkles. On the top of that, having member of congress putting stumbling blocks at each and every step must be hell. I used to think that American politicians are a little better in bringing their country’s interest before their party. But listening to Bill Clinton’s convention speech changed my perspective, when he quoted a republican senate saying “their number one priority was not to put America back to work, but to put President Obama out of work.” May be this is one of the contents that I need to double check with fact checkers.

I hope that his journey in the last four years are not eroding Obama’s optimism and energy, which attracted us all. Watching him on the first presidential debate on Wednesday, I thought he was looking uninspired, I wonder why? Is that a sign of frustration? Is this the changed Obama?

I am also eager to see the impact of the first debate on the race to the presidency. Would people really base their judgement on their presidents debating skill? Or they make their choices according to candidates plan and performance?

View all posts by kibnesh →

2 Comments on “Observing Democracy and Obama”