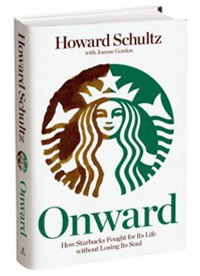 “As a business leader, my quest has never been about just winning or making money; it has also been about building a great, enduring company, which has always meant trying to strike a balance between profit and social conscience.” -Howard Schultz, CEO of Starbucks Corporation

Onward outlines Starbucks Corporation’s turbulent experience throughout an economic downturn and its subsequent rebuilding efforts, spearheaded by a resolute leader for whom failure was not an option–Howard Schultz. His philosophy is summarized by one of his most memorable quotes, where he says, “Starbucks is not a coffee company that serves people. It is a people company that serves coffee, and human behavior is much more challenging than any muffin recipe or marketing strategy.” Howard Schultz’s dedication to the company is grounded in a sense of responsibility to the Starbucks family—that is, its employees, business partners and loyal customers. Throughout his narration, he admits that his main focus for the company was not profit, but recapturing its dedication to its partners, stakeholders and customers. For they could not be in the business of coffee without first rooting itself in the business of people. 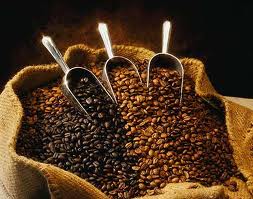 “Starbucks began losing its way. We thought in terms of millions instead of one customer, one partner, and one cup of coffee at a time. We forgot that all those ‘ones’ add up.

The book’s tagline reads, “How Starbucks fought for its life without losing its soul.”  In order to restore the passion and the commitment that everyone at Starbucks needed to have for their customers, Schultz knew they had to take a step back before they could take many steps forward. What follows is  his plan to refocus the multi-billion dollar corporation on the foundation of its business–people–or risk its very livelihood.

His consultative leadership styles are evident throughout the book, where he describes holding open forums to hear feedback, working hands-on in various stores, and even visiting coffee bean farms in Africa to refine every step of the coffee experience. I think people are drawn to follow Schultz because despite his immense success, he is still humble. He insists on lowercasing all company job titles (that’s right, he’s the ceo), and refers to all Starbucks employees as “partners.” These attempts at leveling the playing field show how he encourages two-way communication among the levels of his business.

After months of research, Schultz laid out five key milestones that would be the blueprint to righting the ship. He called them Starbucks’ Transformation Agenda:

Though some critics rebuffed Onward as a “self-flattering memoir,” it still reached No. 1 on the New York Times Bestseller List. I think part of the book’s success can be attributed to the company’s widespread appeal and narrative-style prose. It is not a “secrets of success book” aimed just at high-powered executives trying to climb to the top of the corporate ladder. It’s the kind of book you can read on a Sunday morning, while still inspiring readers with Schultz’s passion, drive, and people-centered leadership. Schultz’s vision essentially brought Starbucks back to life: it transcended short-term goals in order to focus on the big picture and the ultimate fate of his company. At every step he was transparent in his plans, ensuring to explain the motivation behind each initiative before implementing it. Because of this, partners and stakeholders rallied behind him to make his vision a reality. 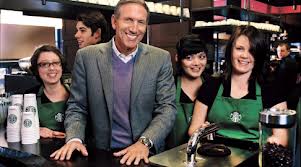