This week I had to read a book for my Human Sexuality class called “Oversharing” by Ben Agger. It discussed social media and blogging in a critical light that removed me from the normal “social media savvy” attitudes of the Cronkite School and showed me some of the societal problems with constantly updating Twitter and Facebook. The author defined oversharing to be when people “divulge more if their inner feeling, opinions, and sexuality than they would in person, or even over the phone.” 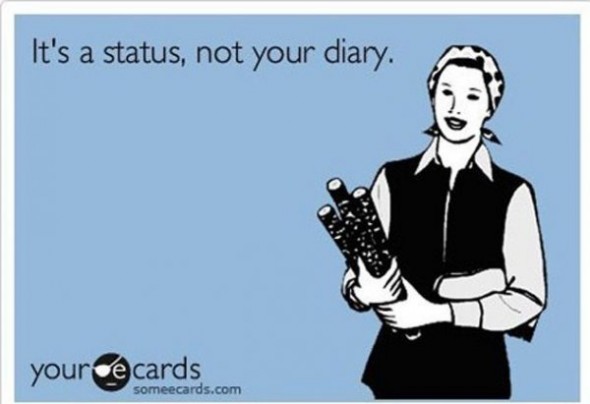 Agger argued that replacing in-person interaction with texting, tweeting or blogging is dangerous to society. In his view, discourse is lost in a tweet or Facebook post, and a blog is akin to a diary entry. Some of his viewpoints seem archaic and lack research, such as his commentary on blog posts. He doesn’t understand that the concept of blog has changed, and can mean a whole range of things, from someone ranting at Obama to a journalist conducting an investigation of a business. He simplifies many online practices, categorizing Facebook posts as pointless drivel about people eating enchiladas (like, his perception of Facebook is people engaging in the banalities of life) or Twitter as simplified chatter. He does not understand that many people use social media as an interface for sharing important information like newspaper articles or breaking news.

However, he makes some relevant points about how the  smartphone becomes an extension of the hand, and how we always seemed to be “plugged in” in today’s day and age. As I read to class this week, he wrote, “I favor connection but not necessarily round-the-clock connectivity. We gain the world by lose ourselves in it.” It does make me sad that when I go to a restaurant with certain family members, we tap away at our smart phones instead of having a real conversation. And sometimes at my internship, even though my editor’s desk is 10 feet away, we email each other questions and conversations. I don’t know how much of a difference walking over to him and chatting would make, but I’m sure that we are ignoring something fundamentally human.

Agger theorizes that we all feel alienated in some sense, and the Web is there to fulfill our sometimes-overpowering loneliness. I know that I have to fight getting on Facebook every 10 minutes, even when I know I don’t need it. It’s nice to see what my friends are doing, but it’s also a waste of time to know every detail of their lives when I could be getting homework done or watching a movie or reading a book. It really, usually is a waste of time.

I wonder what the differences are in some of the fellows’ countries, where the Internet might be slower and everyone probably doesn’t have a smartphone. Do people feel more comfortable speaking to each other? Today almost all of my friends prefer texting over talking on the phone. Talking on the phone requires much more effort and complete dedication of one’s attention. Do people seem just a bit more physically connected in your home countries?

In the end, I think speaking in person needs to be held at more value than it is today. Nothing is better than a good old fashioned conversation, whether it’s a source, family member or friend.

Written by: harmonyhuskinson on February 15, 2013.