After watching the film “The Year of Living Dangerously,” we answered a few questions about the film, as seen below.

1. Which leader(s) did you admire most?

We admired Billy Kwan as a leader the most because it was obvious that he truly cared about making a difference in Indonesia. He was intelligent, insightful, positive, and willing to do almost anything to help further the state of the Indonesians—including die for them. He thought anyone could make a difference and had passion in his work, which was refreshing. (We thought his quote “anyone should contribute, do something small at least to fight poverty” was very telling of this sentiment.)

We also liked how Kwan strongly guided Guy Hamilton, though he never actually “told” him what to do. A good leader can lead by example and recognize the strength of his or her followers, and that’s exactly what Billy Kwan did. Kwan showed Guy the real Indonesia, and recognized that he would want to tell that story.

2. Identify an ethical dilemma or moral situation in the film faced by any character. What questions does this dilemma raise, and are there answers?

Guy Hamilton’s dedication to his job exposes him to ethical and moral conflicts upon learning secret information about the PKI.  An ethical issue surfaced when he had to make the choice between his burgeoning career and the British woman he fell in love with. 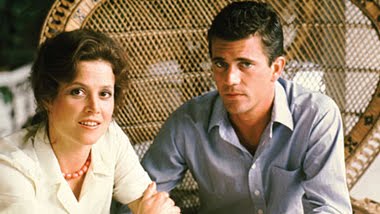 Thus, we decided that this raises the ethical question of what is the nature of human love, trust, commitment and loyalty, and how may this conflict with a professional journalist’s ethical commitment to objective “truth-telling”?

Through our discussion, we found that there is “right” way to make this decision, nor is the decision black and white. The line between protecting the story and the collective is blurry; it is up to us as individuals to serve our profession the best way we know how and in alliance with our code of ethics. Serious truth-telling will almost always harm someone. Though the SPJ code “seek the truth truth and report it” offers an unproblematic defense for Guy’s reaction in using the top secret information Jill gave him, its other principle “minimize harm” also contradicts this decision because he put both Jill’s and his life in danger. Here, we can see the dilemma and the struggle that ultimately led to Guy’s emotional awakening.

3. Do you think there is a written standard or ethical behavior across all professions?

Yes, we think that all professions have norms or written ethical standards that assure the public that members of regulated professions are acting in a socially and professionally acceptable manner and that they don’t act according to individual benefits. No matter what profession one is working in, he or she is responsible for upholding a certain moral standard when working to ensure that the job is done as well as possible.