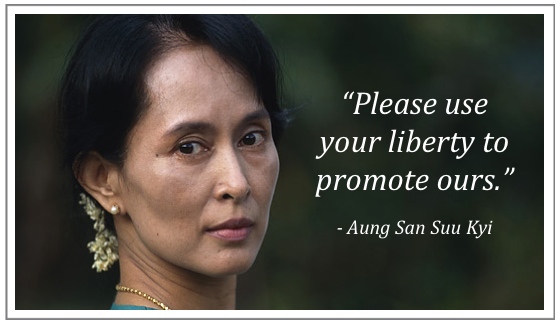 Aung San Suu Kyi was two years old when her father, then the de facto
prime minister of what would shortly become independent Burma, was
assassinated. She attended schools in Burma until 1960, when her
mother was appointed ambassador to India. After further study in
India, she attended the University of Oxford, where she met her future
husband, the British scholar Michael Aris. She and Aris had two
children and lived a rather quiet life until 1988, when she returned
to Burma to nurse her dying mother, leaving her husband and sons
behind. There the mass slaughter of protesters against the brutal and
unresponsive rule of military strongman U Ne Winled her to speak out
against him and to begin a nonviolent struggle for democracy and human
rights in that country. 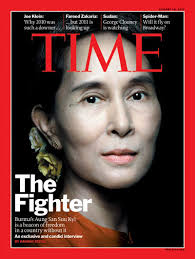 In July 1989 the military government of the newly named Union of Myanmar (since 2011, Republic of the Union of Myanmar) placed Suu Kyi under house arrest in Yangon (Rangoon) and held her incommunicado. The military offered to free her if she agreed to leave Myanmar, but she refused to do so until the country was returned to civilian government and political prisoners were freed.

In 1998 she announced the formation of a representative committee that she declared was the country’s legitimate ruling parliament.
In May 2009, shortly before her most recent sentence was to be
completed, Suu Kyi was arrested and charged with having breached the
terms of her house arrest after an intruder (a U.S. citizen) entered
her house compound and spent two nights there. At the time of her conviction, the
belief was widespread both within and outside Myanmar that this latest
ruling was designed to prevent Suu Kyi from participating in
multiparty parliamentary elections (the first since 1990) scheduled
for 2010. 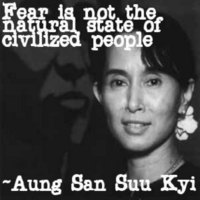 The government parties faced  little opposition in the November 7, 2010, election and easily won an overwhelming majority of legislative seats amid widespread allegations of voter fraud. Suu Kyi was released from house arrest six days after the election and vowed to continue her opposition to military rule.
Government restrictions on Suu Kyi’s activities were further relaxed during 2011. She was allowed to meet freely with associates and others in Yangon and by midyear was able to travel outside the city.

U.S. relations with Myanmar improved with landmark visits by both
President Obama to Yangon University in November 2012 and by President
Sein to Washington in May 2013. On both occasions, the leaders spoke
of the warming of relations between the two countries.

Peace as a goal is an ideal which will not be contested by any
government or nation, not even the most belligerent.
“Aung San Suu Kyi “