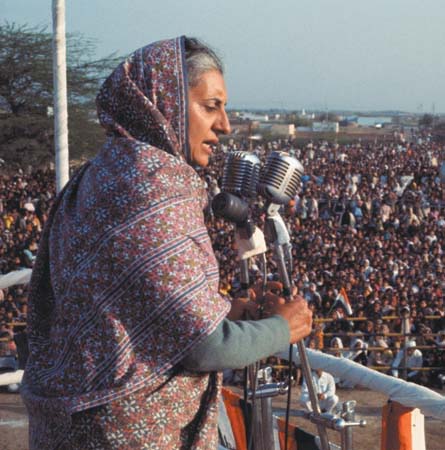 “She could be a very good leader for her people, her country, not for us. She destroyed us”, Wahida Ifat, nonprofit professional from Bangladesh (W. Ifat, personal communication, October13, 2013). This comment about Indira Gandhi’s leadership reflects the general controversy founded in her history. A woman who governed India from 1966 to1977 and between 1980 and 1984 and is responsible for putting India on the geopolitical world map.

Indira took on the position as Prime Minister after her father, Jawaharlal Nehru, died. Married and mother to two sons, she had had experience in some political positions besides working for her father. Even so, she was selected by parliament members to lead the country because they thought it would be easy to manipulate her. Behind her back they called her the “dumb doll.”

Nevertheless, while having Indira Gandhi as Prime Minister, India decreased from 65% to 45% of poverty, increased 30% in literacy and made a Green Revolution- raising food production to 25%. Besides her accomplishments, Indira is well known for her charismatic mass appeal and populist political program.  Even though it didn’t solve problems such as hunger, sanitation condition, religious conflicts, and caste, there was much less response in the criticism about corruption in her government. In the international scene, Indira showed India off as a powerful country when Indian military forces quickly decided the Pakistan War without leaving the chance for US interference. In 1974, by her leadership, India launched the first nuclear test confirmed made by a country outside of the five permanent members of the United Nations Security Council. In the age of the Cold War, she maintained diplomatic relations with the USSR and US, showing an even stronger inclination for socialism. It didn’t take long before she was compared to Hindu goddess Durga,  and the incarnation of Shakti (the female principle of divine energy).

Leadership style – Once she became Prime Minister, Indira Gandhi did all she could to keep the power in her hands. She spent four terms leading the world’s most populous democracy – 700 million people. She had used illegal means and changed the game’s rules at her own sweet will. Indira Gandhi abused the establishment of state of emergency, tried to subordinate the Parliament, imposed censorship on the press, defrauded acts, imprisoned opponents and reacted violently against adversaries. For these reasons, Indira Gandhi is mostly classified as an authoritarian or dictatorial leader. Actually, the Indira leadership can be divided in two phases: 1967-1974, when she appeared as a mass and charismatic leader; and 1975 – 1984, when she and her government is distinguished by centralization of power.

Person and leader – Another important aspect about Indira Gandhi was her complexity. Some of her actions are not easy to explain. Considering that she grew up watching her father and mother fighting for democracy and freedom and suffering in jail for their cause, it sounds weird that the limitation of freedom and the murder of 1200 people in a temple would come about during her time in government. In a study about her personal life and leadership, the author affirmed that she had four personalities: ambitious, reticent, contentious and dominating. In his conclusion, he described her as a dominant and ambitious leader whose main characteristic was motivated by pragmatism and power. That kind of leader is much more concentrated in goal than process, achievements than relationships. It also acts as an advocate, not as a consensus builder, (Blema S. p. 775 –777, 2005).

Woman as leader – Before Indira Gandhi was Prime Minister of India, the only other woman who had the done it  was two years earlier: Sirimavo Bandaranaike of Sri Lanka, in 1960. From that moment, many others women carried out responsibilities as leaders in the political field, but Indira is the only one that never belonged to a dynastic family during her terms. She didn’t have her father and/or her husband beside her(Adler N. p. 143, 1996).  Unlike other women’s biographies, Indira Gandhi’s mistakes and successes are not attributed to outside influence.

Although Indira Gandhi is a symbol of female power, her critics say that she didn’t work to increase women’s rights. On the other hand, in 1976 she lead a record birth control campaign in the world, providing access to contraceptives, obligatory sterilization, and restricting her servants to have no more than three children, although there were protests.

Indira Gandhi also had to conciliate her political career with her role as the Prime Minister’s daughter, mother of two sons and wife. Indira faced difficulties in her private life too. One of her sons died in a plane crash, and the other was involved in corruption. Her husband was not supportive, but instead was competitive and her marriage failed.

As a final point, Indira Gandhi faced the challenges of leading an overpopulated country, dealing with the effects of extreme poverty and huge diversity of religions and sects. Despite her authoritarianism, it is undeniable that the advances that India had were guided by Indira’s vision, strategy, and combination of pragmatism and opportunism.