When we say the word peace, we think about the absence of violence. In last week lecture we have learned the difference between negative (absence of war) and positive peace, which peace studies define as “the presence of the conditions for a just and sustainable peace, including access to food and clean drinking water, education for women and children, security from physical harm, and other inviolable human rights”.

Word peace has become so exposed and manipulated, that we have almost forgot its true meaning. Something like using a word God. Both words have been so misused, that in its name we have witnessed terrorist attacks, bloody violence and disturbances. Nonetheless, word peace is part of the title more than 400 nonprofit world organizations, such as World Peace Foundation, International Institute for Peace, International Peace Bureau, Feminist Peace Network, International Commission on Peace and Food, Peace Development Fund, etc. About 400 colleges and universities around the world offer peace studies programs of different kinds.

Peace studies describe the idea of positive peace as rooted in the understanding that a “just peace” is the only sustainable kind of peace; an approach that seeks merely to “stop the guns” while ignoring the denial of human rights and unjust social and political conditions will not work in the long run. Opposite to just peace is an idea of a just war. That concept was fully elaborated by president Obama in his laureate speech in 2009 when receiving Nobel Peace Prize for “his extraordinary efforts to strengthen international diplomacy and cooperation between peoples.”  Obama explained that the concept of a “just war” emerged, suggesting that war is justified only when certain conditions were met: if it is waged as a last resort or in self-defense; if the force used is proportional; and if, whenever possible, civilians are spared from violence.

It is hard to recall any violent act where civilians were separated from it or have not been collateral victims. Syria is reminding us every day, what it means to be civilian victim.

As the 11 October is approaching for announcement for another Nobel Peace prize winner, one cannot question, is it fulfilling its purpose? As stipulated at the official website since World War II, the Peace Prize has principally been awarded to honor efforts in four main areas: arms control and disarmament, peace negotiation, democracy and human rights, and work aimed at creating a better organized and more peaceful world.

Since 1901 till today only 15 women have been awarded for the Peace Prize. I had the honor to meet 2011 Tawakkol Karman, the youngest Nobel Peace laureate, in last year’s World Forum for Democracy held in Council of Europe, Strasbourg (France). 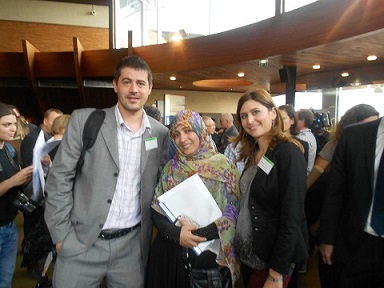 Karman, Yemen journalist and human rights activist, earned the peace prize for her “non-violent struggle for the safety of women and for women’s rights to full participation in peace-building work.” She was one of outstanding figures during Arab spring and her speech on calling for peace in Syria was very motivating and emotional. “Governments worldwide must commit to international rights law to create change in a world where liberty was being trampled by dictators. The hopes of the UN Rio summit of 1992 had not materialised, and despotism and corruption were still rife; leaving development goals trailing behind. Globalisation should be made to work for the good, and provide positive change even for the weakest in society. Women, especially, must be given support to participate in democracy, with gender equality and freedom of expression a pre-requisite for democracy”, she said. Listening to women like Karman, makes you believe that peace has a chance.

First thing that comes to my mind now is a song I like very much, John Lennon’s classic Give peace a chance.

2 Comments on “Let’s give peace a chance”