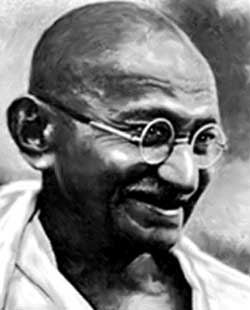 After the presentation by Professor Yasmin Saikia I realized I had never thought much about what peace really was before. After further reflection I realized that I had always only regarded “negative peace,” which Saikia described as the absence of war. I believed that if there was no violence then we would be at a state of peace with one another, not only in our small communities, but globally. Then I realized the importance of positive peace, I think that positive peace ensures that we are still communication with one another. Wouldn’t it be possible to avoid conflict if every country just looked out for itself and abandoned any relations with other nations?

To be honest, living in the United States, which throughout my lifetime has brought on multiple wars by meddling in other countries’ affairs the idea of refusing to engage in any kind of conflict with other countries, seems like a good idea. However after listening to more information on Gandhi and reflecting on positive peace, it seems as if instead of avoiding each other for our differences the goal should be to accept differences and reach compromises. It saddens me that though this concept seems as though it should be easy to not only understand but execute it is not. Positive peace requires integration between those who are different and integration will never allow for a complete lack of conflict but I believe that with communication skills and a sense of understanding peace is possible. However, I also believe in Gandhi’s notion that peace is something we must strive for. There is no way to definitely measure peace, especially if we consider positive peace as well. Instead, I think that hopefully our societies will instead move closer to this notion of “peace” by integrating in a non-violent way. I especially like a quote from an article I read (http://www.irenees.net/bdf_fiche-notions-186_en.html) that said, “Peace does not me an the total absence of conflict. It means the absence of violence in all forms and the unfolding of conflict in a constructive way.”

In a world that is becoming increasingly more and more globally driven by new technologies I think peace becomes more difficult in some ways. Different communities, religious groups, and countries are now integrating in ways that would not have been possible in the past. And though I hope that this integration will eventually lead to greater understanding it also has the potential to lead to more reasons for conflict.