‘Darkness cannot drive out darkness; only light can do that. Hate cannot drive out hate; only love can do that’, are the words from Martin Luther King’s Jr. book Where Do We Go from Here: Chaos or Community? (1967), p. 62.  This quotation comprises the legacy of this great American and world civil right activist and Nobel Peace Prize winner. Martin Luther King Jr passionately believed in non-violent leadership, describing it as a powerful weapon which can reestablish a broken community.

He was deeply inspired by M. Gandhi campaign of nonviolent resistance, which brought him fate in the power of love and made him realize that the truth of philosophy on turn the other cheek, is not only limited on individual misunderstandings but it is applicable for conflicts and misunderstandings between nations. Nonviolence and creative weapon of love become his life path for which he peacefully struggled until his unfortunate violent death in 1968. 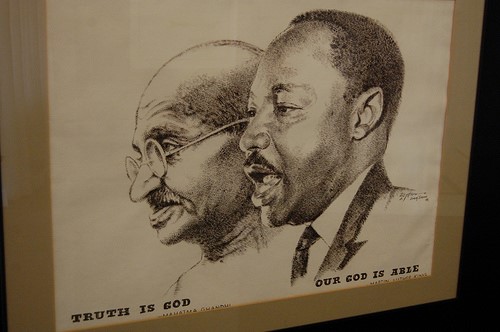 Today, a 50 years after  ‘I have a dream’, one of the greatest speeches ever held in Washington (1963), we are still facing the challenge of peaceful resolution of conflicts around the globe, where chemical weapons, oppression, terrorism and violence are more common answer to the crises.  However, facing world crisis in Syria, where military action is on the rise, it is a great moment to recall his thoughts and heritage of peaceful ‘fight’.

‘Nonviolence is the answer to the crucial political and moral questions of our time — the need for mankind to overcome oppression and violence without resorting to violence and oppression. Civilization and violence are antithetical concepts… Sooner or later all the people of the world will have to discover a way to live together in peace, and thereby transform this pending cosmic elegy into a creative psalm of brotherhood. If this is to be achieved, man must evolve for all human conflict a method which rejects revenge, aggression and retaliation. The foundation of such a method is love.’, Nobel Prize acceptance speech in Oslo 1964. 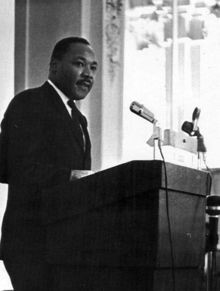 King’s mission is not remembered only as a fight for Afro American racial equality, but he will remain as a symbol for peaceful leadership and an inspiration for any aggregates searching for a change in their communities. As one of my favorite songs  ‘In the name of love’ of Irish band U2, which Bono wrote inspired by a great leader, says

‘…Early morning, April 4
Shot rings out in the Memphis sky
Free at last, they took your life
They could not take your pride

2 Comments on “What can we learn from King’s love driven leadership? by Maja Cakarun”