I will admit that going into this blog post I knew very little about Hubert Humphrey and that is why I decided to go ahead and learn more about him. To begin, I was curious if I was the only one who seemed to not know much about Hubert H. Humphrey or if he was recognized amongst others in my generation and I had just somehow missed out so I decided to ask a few of my close friends if they knew who he was and what they knew about him. Here are the responses I received:

Ryan Krafczik, senior political science and business student: I don’t know who that is.

Brittany McGonagle, senior print journalism student at the Cronkite School: Other than I think he’s the guy with the Humphrey Fellows I don’t know who that is.

Taylor Coli, junior communications student: Wasn’t he Vice President in the 60s? I could be so wrong but I think he’s in politics. 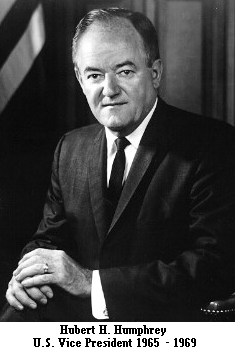 So, it seems I’m not the only one who didn’t learn too much about Humphrey in school. I then read the New York Times op-ed article from 2011 on Hubert Humphrey, America’s Forgotten Liberal, confirming the trend I had already noticed. Then in the article I read this quote by Humphrey:

“To those who say this civil rights program is an infringement on states’ rights,” he thundered from the convention podium, “I say this: The time has arrived in America for the Democratic Party to get out of the shadow of states’ rights and to walk forthrightly into the bright sunshine of human rights.”

What a powerful quote and how sad that the man who said it seems to have been forgotten. I learned that Humphrey was not only an advocate of civil rights but also The New Deal and he served as mayor of Minneapolis, a senator, and as Vice President.

All of this made me wonder why some political figures reach a kind of celebrity where others seem to fade away. It seems to me Humphrey did some great work that should be celebrated more than he is. Is it that history is subjective and we only learn what the writers of history books think we should? This hardly seems an excuse when we have the Internet at our fingertips.

One Comment on “Hubert Humphrey, a forgotten political figure?”