The more the wine lasts, the more it gets better, people say. That matches the exceptional carreer of the moderator and famous  CBS correspondant Bob Schiffer. This anchorman who focused  for several decades many people attention on his very followed news bulletins across  the United States and even abroad, has visited the Walter Cronkite School of Journalism in Phoenix, and  took part to a faculty roundtable discussion. He was in the city of “sun” to receive his award , true, but also to honor the memory of his friend Walter Cronkite who passed away in 2009 without having the opportunity to visit that school which bears his name and carrying on his memory through this award for exellence in journalism. If Bob Schiffer acknowledge the huge legacy of Walter Cronkite, trustworthy and influential  journalist of this 20th century, we have no doubt that Bob is himself and icon of journalism.

This annual Cronkite Luncheon , one of the biggest events in the Phoenix metropolitan area each year, with leaders from the worlds of media, politics, business and education joining Cronkite School students and faculty to discuss about the new vision of journalism,  was a success . Bob schiffer dicussed the  dangers and hope of digital journalism. To him, we (including me and who is reading this right now) are all become publishers as we all own iphones, smartphones tablet ipads etc. It was very instructive moments; We  saw a Bob Schiffer very concerned about the futur of journalism : “Journalism is about finding the true” said the presenter of “Face The Nation” who added  : “it is nice to get it first, but more nice to get it right”.That was refering to the fact that Media are too much directed toward being first to talk about events when they got any footage brought by anyone to the cable station. So that many news got to be fake. That recalls the accountability of journalists in the process of informing people on what is going on around.

For his achievement that great Anchor who moderated several presidential campains debates inclunding the last one between President Obama and Mit Romney, accepted the 2013 Walter Cronkite Journalists award for exellence in journalism. A very great example for the current  and next generations of journalists. 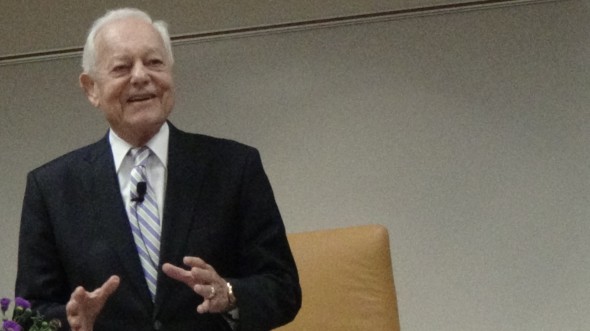 About the dangers of publishing classified information, obtained by leaks, and that may be harmful to people or even threaten the life of many others  “is not the high of  journalism, but the high of irresponsibility” BOB SCHIFFER .

3 Comments on “Bob Schiffer at Cronkite: a news great “artist” lap of honor”