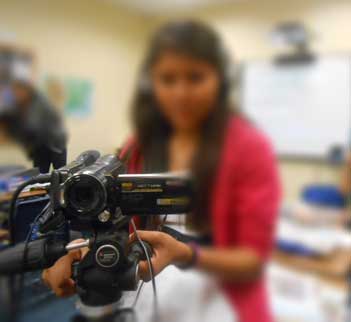 The importance of Native Americans for U.S. history is not questionable, but the little space they have in media is. To minimize this situation Arizona State University Cronkite School of Journalism and Mass Communication goes to the high schools located in reservations to explain the relevance of Native American’s voices in the news media. So, my mentor Anita Luera, director of Cronkite Institute for High School Journalism Institute of ASU, invited me to go along in a trip that started the afternoon of September 23, 2013 and finished late at night on the 27th. Since then, I’m more passionate for the Arizona landscape and I’m interested in understanding issues of race, education and media in America.

The 2011 US census bureau estimated that the population of Arizona is 6,482,505. The data about ethnicity from 2010 shows that 73% of people in Arizona are white, 4.1% are black or African American, and 4.8% are Native American or Indian. In fact, Arizona has 22 federally recognized tribes, communities and nations. It is the third largest population of Native Americans in the country. Here, more than 85,000 people are able to speak Navajo and 10,000 speak Apache. Despite these numbers, Native Americans are misrepresented in mainstream media.

At the first stop in Hopi Junior Senior High School, I had my first shock. The Native American school reservation didn’t remind me of anything the Brazilian schools, which Native people attend. Here, the schools have good structures and staff, they are just the way all educational institutions should be, but that is not common in my country. In the teacher Stan Bindell’s classes, Anita Luera prompted a reflection about media and Native American stories. Then, a student, Lacey Tewanema, expressed how some news stories reinforce stereotypes: “Still today many people think that Native American lives in tepees, don’t have electricity, dress traditional clothes all the time and have others ideas like that. But, we are not. Here in our school reservation we learning from modern technology, we try keeping our culture, but also become border towns,” she said. How would the media look if it was diverse?

Anita Luera talks about news media career, Cronkite School, advice to students to look in advanced for the school they want to attend, compare price, see the scholarship opportunities and other information. But, the part I like the most is to see how the students react when she shows the possibilities of a smartphone and tablet, put a professional camera in front of them, and teach them how to play with these machines. At the St. Michael Indian School, I observed how the position of a student change when she goes from the listener to author. How proud American society would be if more Native Americans could be author of their stories?

I found out more about Native American diversity listening to local radio stations and talked with students who produce and present programs. Indeed, the role of school radio stations in Arizona reservations is crucial for these communities. “The outside radio stations are important for people keep themselves updated about what happens in the world, but our radio helps us to take care of each other,” said the student Hertasha Begaye, who has participated for three years at radio school. It is the same to a volunteer D.J. Agnes Setalla, “our radio station has value because it is the only one that talks about our community calendar, cares about our issues, and speaks in both languages, Navajo and English,” she explained.

At Red Mesa High School, a senior high school student Allen Hongout, has traveled with his family since he was child. They periodically go to Canada and stop in a couple of states such as North Dakota and Montana to meet other tribes. “We travel to celebrate for three days with different tribes. In these occasions we usually dance five different kinds of dances. My uncle initiated me in dancing when I was younger. Now I compete, and I already have won once.” So, why is he taking radio classes in high school? “I can make a voice for my people and myself as well,” he replied. How the media would look if we knew more about Native American celebrations?

Thank you to all the teachers and students that I met, and to my mentor for the extraordinary experience. I hope more Native Americans join the media, tell us their history and help to understand that diversity is one of the most important treasures that a nation could have.

2 Comments on “Where are the voices of Native Americans?”