I never imagined that the USA could have a law that protects “any individual, association, partnership, corporation, church, religious assembly or institution or other business organization” that refuses to serve other based on their religious believes. But, given the controversial anti-gay law or Bill 1062 that passed in Arizonan Legislature on February 21, it could happen, if the governor Jan Brewer doesn’t veto it until next Friday.

Bill 1062 brings a new definition of exercise of religion: “the practice or observance of religion, including the ability to act or refusal to act in a manner substantially motivated by a religious belief, whether or not the exercise is compulsory or central to a larger system of religious belief.” In other words, or my personal interpretation, in name of the freedom of religious, the Senate Bill 1062 legalizes discrimination.

The gay people directly affected by this Bill, could have a harder life. Whether it is doing daily activities such as attending school, having dinner, booking a hotel, going shopping or working out, business-owners can refuse to serve them. It reminds me a of time when African Americans had something similar to keep them away from white peoples’ spaces. And yes, women suffered for the same situation too. Different excuses, similar methods, but nonetheless, all historical wrongs.

Furthermore, if that person or institution who use the exercise of religion as excuse to discriminate other is dragged to a lawsuit, the Senate Bill 106 foresees a free-pass to them:

“E. a person that asserts a violation of this section must establish all of the following:

1. that the person’s action or refusal to act is motivated by a religious belief.

2. that the person’s religious belief is sincerely held.

3. that the state action substantially burdens the exercise of the person’s religious beliefs.

f. the person asserting a claim or defense under subsection d of this section may obtain injunctive and declaratory relief. A party who prevails in any action to enforce this article against a government shall recover attorney fees and costs.”

From the history of American Civil Rights and a multicultural perspective, I see conservative groups appropriate the words such as rights and freedom, to have the prerogative to discriminate and exclude other. It is a wrong move, in an age of bridges, that the Arizona House of Representatives is building fences between people.

A Brazilian poetess Cecilia Meireles once wrote that “freedom is a word that feeds the human dream that no one can explain, and anyone does not understand.” I would add that when freedom is denied, everyone can see, and will step back as some Arizonan business owners are doing. 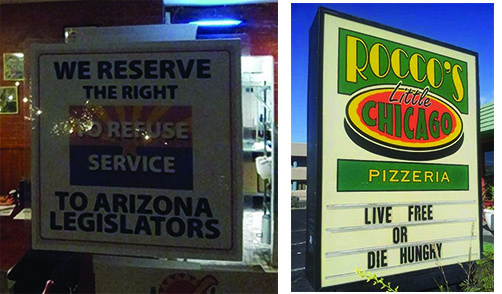 4 Comments on “Bill 1062 : Manipulation of Rights and Freedom”