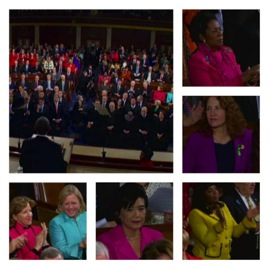 The women were definitely succeeding on the fashion front at Tuesday’s State of the Union Address. Bright colors flourished in the congressional seats among an otherwise dismal sea of professional, boring black suits. Women may still only be making 77 cents for every man’s dollar, but they weren’t letting the glass ceiling hold down their fashion sense. Fuchsia, fire truck red, and bright blue were some of the favorite colors at the event, as well as some yellow, cyan, purple and even burnt orange.

First Lady Michelle Obama stunned from the box seats in a textured forest green dress and matching cropped cardigan by Azzedine Alaïa (a foreign designer-gasp). Pretty much the women in attendance were bold and confident with their fashion, which anyone could appreciate. 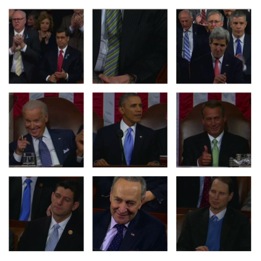 The men at the SOTU hardly strayed from their black-suit-comfort-zone. The President wore a predictably democratic blue tie and flag pin. Most everyone else stayed within those patriotic colors (and some green) in spotted or striped ties. Boring! The most unique male outfits came in the form of one sweater and one lavender button-down. Where’s the risk, gentlemen? This is why Joan Rivers doesn’t bother to review the fashions of this important political event (and also because she’s recovering from red carpet Grammys coverage). 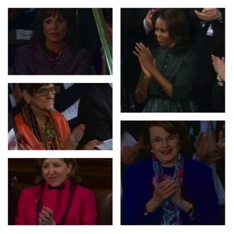 The ladies accessorized with some surprisingly lightweight scarves considering the average temperature was 18 degrees (thanks Polar Vortex). They also sported interesting patterns and lots of chain jewelry (a la Two Chainz).

Overall, I would give the fashions of the SOTU 3 out of 5 American Flag Stars. The women really carried this event with their bold, creative colors. Best dressed:  Michelle Obama. Runner up:  Orange Lady. Honorable mention: Willie Robertson from Duck Dynasty for his patriotic bandana. Worst dressed:  Every man in a boring tie.

Next year lets cross our fingers for more fashion risks!