Martin Niemöller, a prominent Protestant pastor and outspoken opponent of Adolf Hitler, was one of the earliest Germans to speak openly about the broader complicity in the Holocaust. He is most well-known for the quotation: 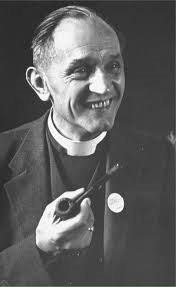 Following Germany’s humiliating defeat in World War I, Niemöller believed his country required a strong leader to promote national unity and honor. Sharing Hitler’s belief in the importance of Christianity’s role in a renewal of national morality and ethics, Niemöller enthusiastically welcomed the promising leadership of the Third Reich. As a well-known Christian leader, he was a supporter of the new regime until he and his church came under attack. As he began to critique the Nazis in his sermons, he became a target and was ultimately incarcerated in a concentration camp. Following the war, he gained controversial prominence for his acknowledgement of collective German guilt, which he expressed in his famous quotation cited above. In acknowledging his own prejudice and inaction during the Nazi’s regime, he offered future generations a lesson to be learned.

The sentiment expressed in his famous statement recognizes the compliance of those who did not speak up for their neighbors and fellow citizens who suffered. By acknowledging that it was too late for action when it was his people under attack, he informs us that we must recognize the plight of others before we lose the opportunity to act. We must know what we stand for and respond to oppression by voicing our protest. Those who have responded to this call to action and have voiced their opposition are the individuals who live in history as heroes, individuals who spoke up for those who had no voice, individuals like – Martin Luther King Jr., Nelson Mandela, Aung San Suu Kyi, and teenage rights activist Malala Yousafzai. I realize that not everyone can be a national hero, but each of us has the ability and moral responsibility to respond to injustice. It is important to recognize the significance of speaking up for the ideals you believe in and speaking against prejudices and ideas that promote intolerance. It is equally important to acknowledge the consequences of remaining silent. Martin Niemöller’s experience compels us to acknowledge our beliefs and values, find our voice, and speak up, otherwise, we are all responsible for the negative consequences!