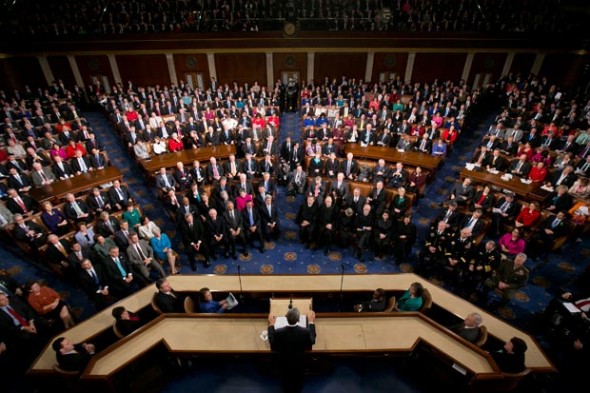 The State of the Union address that takes place each year, giving the President the opportunity to address Congress and the American people, is one of the nation’s best arenas for displaying democracy. Article II, Section III, Clause I of the United States constitution outlines the responsibilities of the President to offer periodic reports to Congress on the state of the union. This practice was intended to increase transparency and allow for the President to share with Congress his unique knowledge gained from the President’s station on the national and international stage.

During President Obama’s most recent address, Congressman Steve Stockman (R-Texas) made a show of walking out of the chamber during President Obama’s speech. Following the broadcast, he shared with reporters that he was distraught by President Obama’s abuse of his constitutional powers. Although this was perceived as a disrespectful gesture on the part of Representative Stockman, it was an act that put on full display the democratic nature of the nation. The fact that the United States’ government allows for such dissent is a testament to the country’s democratic ideals.

Famed Russian novelist, Aleksandr Solzhenitsyn, known for his literary critiques of Soviet totalitarianism described in his book, The Gulag Archipelago, how there were dire consequences for anyone who was the first to break off their applause during any speech given by Stalin. The KGB would identify those in the crowd who did not show an ‘appropriate’ amount of appreciation for their leader and would classify those individuals as dissenters. Without trial or appeal, those individuals would be immediately sent to the Gulag. As everyone feared the consequences of ending the applause first, standing ovations would go on for minutes on end. The Soviet’s solution to this problem was to ring a bell in order to alert the audience that they could be seated.

Although the State of the Union Address often resembles propaganda, rather than guidance for the nation from its leader, the rhetoric is geared towards emphasizing the shared principles of United States. A tangible illustration of our democratic ideals is a member of Congress demonstrating his First Amendment right to openly and publically criticize the President of the United States and suffer no act of retribution. There are many factors that distinguish the United States from totalitarian governments but, by far, the most important is the ability to dissent without fear of punishment by the State. The nation may be divided along political party lines, but its people are committed to the basic doctrines set forth in the Constitution of the United States and will hold its Representatives accountable to protect it.

One Comment on “The State of a Democratic Union”