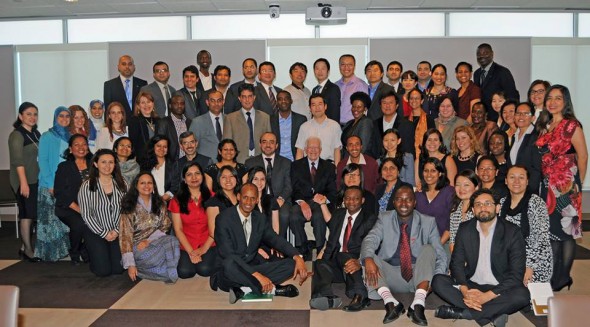 As part of our Hubert H. Humphrey Fellowship Program we were offered to participate in an Enhancement Workshop with different options to choose from. I decided I wanted to go to the Social Justice and Human Rights session in Atlanta and have great time with other Fellows I met in Washington D.C. during our Global Leadership Forum back in October last year.

Being in Atlanta again brought memories back and, of course, I built new ones. I really had great fun with Fellows from Lebanon, Burundi, Venezuela, Panama, Ghana and many other countries. During our time at the Villa International we played pool, table tennis and we even had a table to play soccer, you know, with the small rotating guys.

The days passed by really fast and, among the things that we did when we arrived was a visit to CNN headquarters. This was very interesting as I could witness the machinery in place to run a news organization like that. Looks like almost everything here in the USA has to do with shows and business. Of course, a lot of people watch CNN and their news anchors are celebrities. The whole company makes profits out of that and a big portion of the public loves this.

Besides, we had a downtown tour, which was awesome. The guide explained to us about the historical buildings, prominent figures in the State of Georgia and the importance of the city of Atlanta as a transit center.

Another place we visited was the Martin Luther King Memorial. We watched a very good documentary there about the life of MLK and took a lot of pictures with the statues. Of course, many of the fellows purchased souvenirs from the stores located at the facilities. I did not. This happened also at the Carter Center, where the organizers took us to the museum and the gift shop. The President would sing only books, people were saying, so a lot of the Fellows went ahead and purchased books of their interest. Of course, I did not buy any.

The most attractive parts of the workshop were the open discussions with Mr. and Mrs. Carter. Yes, the former first lady and the former President of the United States. Mrs. Carter focused on explaining to us the work the Carter Center is doing and took several questions from the audience. When president Carter spoke with us, I liked the fact that it was an open forum, more than a lecture. There were all kinds of questions and the president was very kind and joyful.

Of course, there was a party! We could not leave Atlanta without a party. We had great fun with the talent show, in which there was a person from Myanmar cooking some traditional food; a team of Fellows from a university in Montana joined forces for traditional dances and we even had afterwards a guessing game, in which one had to guess which country was represented in images presented to us.

In the end, great experience. I had great fun and this trip made me realize how much I appreciate the relationships I have cultivated though out my life. It was just awesome!

P.S.: No, I did not visit the Aquarium, jajajajaja. Next time!