I thought I would use my blog post about Tribes: We Need You to Lead Us by Seth Godin to focus on Godin’s idea that people aren’t afraid of failure or being wrong, but that people are afraid of being blamed or criticized .

One of the main ideas in Tribes is that change leads to success and good leaders seek to create change. There is a fair amount of risk when seeking to insight change. That is probably why people avoid it.

We hear throughout our lives that we shouldn’t be afraid of failure and that failure is just part of the process. I think I agree with Godin. People aren’t afraid to fail they are just afraid to be blamed for the failure. 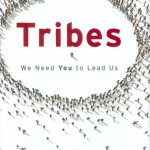 My favorite quote from this book overall is, “How was your day? If your answer was ‘fine’, then I don’t think you were leading.” (pg 38)

That is the one thing I hope people take away from this book.

View all posts by Sophia Mayberry →

4 Comments on “Tribes: We Need You to Lead Us”