When I learned I will spend 9-months of my life in Phoenix as a Humphrey fellow, my first thought about my new American home was what do I know about the state of Arizona? Four things occurred in my mind: Grand Canyon, John McCain, Phoenix Suns (as Croatian basketball player Gordan Giricek was part of the team in 2008) and border issues with Mexico. On the letter, I didn’t know much, except there are constant fights on relation police-drug cartels, which I would occasionally read in the media.

Our border trip with Humphrey fellows from the University of Minnesota Law School, to Nogales, a small town in Santa Cruz County and just a fence away from Mexico, opened a new perspective on the border issue.

Arizona’s border with Mexico is 389 miles long, on the northern side with Mexican states of Sonora and Baja California. As the border is porous, Sheriff’s Offices in Nogales face illegal and army immigration, and drug trafficking almost on daily basis. Therefore, police gun shooting is not an unusual event to the inhabitants of Nogales. 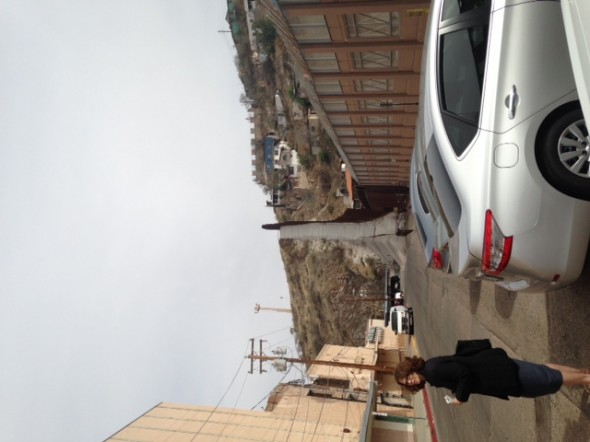 It was a bit surprising to see bollard fence border in the middle of the town with houses just next to it on both sides. People literally live in a house with border fence in their yards. 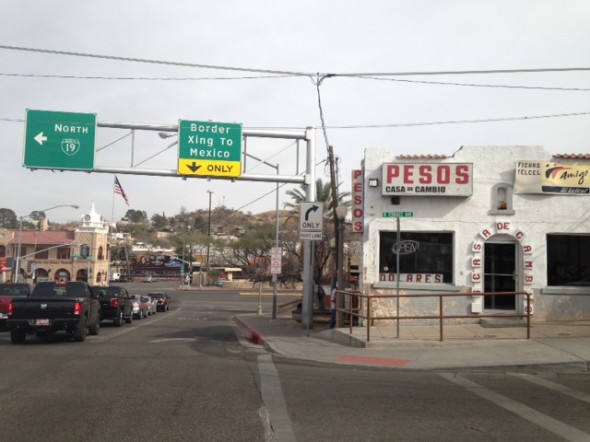 Although, the whole border is monitored with cameras and Border Patrol, this does not prevent illegal trespassing or even attempts of climbing over 18-feet bollard fence, as witnessed by Arizona Senator John McCain during his visit to Nogales last March. McCain did not miss the opportunity to tweet about it (receiving 253 retweets that day) emphasizing that threats to a border security are real.

Besides the obvious attempts to climb the fence, some were very creative, as we heard from Border patrol. For example, they discovered underground tunnel connecting house in Mexico and house in Arizona, used for drug trafficking.

“No matter what, they always find some ways to cross the border”, said the Sherriff’s Office representative.

As we left Nogales feeling grateful for another experience helping in discovering different faces of America, next day visit to the Tent City and meeting sheriff Joe Arpaio was even more interesting.

Tent City jail is known across the country as one of the most controversial ones in America. This 20-year-old jail is called a brainchild of Maricopa County’s sheriff Joe Arpaio, popular for his straightforward though approach.

The idea of setting up the jail of hundreds of Army Surplus tents from the Korean War era was initiated by Arpaio, one of the longest America’s sheriffs, in 1993. The reasoning behind it was to save the county the cost of building a new jail.  Additional savings Arpaio made by cutting meals on twice a day (first one from 5-8am and second at 5pm), based on soy proteins and eliminating salt and pepper. The saving reached to $20,000 annually. Another controversy is pink underwear that inmates are using and dressed in chain-gang stripes, which reminds on old movies showing Wild West back in the days. The tents are unheated in winter and uncooled in summer—temperatures inside them can reach up to 145 degrees. For those who did not visit Phoenix in August, I can only advice – don’t if you don’t have to! The heat was almost unreal to me, but luckily mild winter compensate it. Having experience the heat, I could understand why people start moving in Arizona after air conditioning was invented.

The abovementioned issues in Tent City jail create a rebel from different human rights activist association, as well from inmates, who even sought for the justice in court. 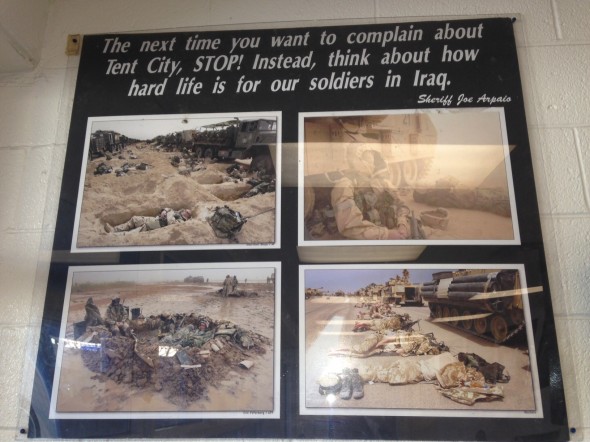 Arpaio was passionately defending his decision with an argument written in the building entrance saying: “The next time you want to complain about Tent City, STOP! Instead, think about how hard life is for our soldiers in Iraq.” It might be controversial, but it is obvious that he enjoys a support from vast majority in Maricopa County, having been elected in 6 consecutive terms.

Reading about the Tent City controversy and Joe Arpaio, prior to our visit to his office, prepared me for what to expect. He was exactly what I imagined he would be: direct, authoritarian, controversial and sincere.

The majority of discussion was coming from our questions on inmates living conditions. We asked him did he try the meals served in jail. “Of course, I did it many times, just last week on TV. It’s awful, but do you think I should give them a steak every day”, said Arpaio. I must admit that Arpaio did not leave an impression of a person without energy. Although in his early 80s he is planning to run for another term as Maricopa County sheriff. We wanted to know what is his motivation? “People love me. I like to be in media, and enjoy the protests against me. If they want me to stop running, they should stop protesting”, said Arpaio.