It was actually this Take The Lead Launch event at ASU back on February 19, 2014 where Sandberg was the headline speaker, which prompted me to read Lean In. In her keynote presentation, Sandberg made a powerful point that as women, “we are held back by things within ourselves.” After listening to her explanation of the main reasons why we “lean back” instead of leaning in, I felt I needed to read her book. 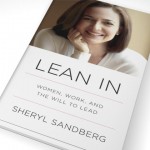 Sandberg adeptly injects a balance of authenticity and humor in her writing that makes it easy to connect with her, and to identify oneself in her. She presents a compelling case for leaning in by sharing her own triumphs, mistakes and insecurities. Her message is simple – encouraging more women to dream the possible dream and encouraging more men to support women both in the workplace and in the home. Her mission, in her words, is to reignite the revolution by internalizing it one woman at a time, and slowly close the gap on inequality between the genders.

I think one of the greatest contributions of her thesis is to open the discussion on feminism again. She says many believed that the feminists of the sixties and seventies had done all the hard work of achieving gender equality. “We lowered our voices, thinking the battle was over, and with this reticence, we hurt ourselves.” This research on the gender pay gap substantiates the point that the battle somehow lulled.

This book makes a renewed call for champions of feminism. It opens eyes and opens discussion toward creating equality for women in both professional and personal life.

One of the greatest faults of the book is said to be Sandberg’s overemphasis on women changing themselves – their thinking, actions, etc. rather than acknowledging and attacking the institutional and societal barriers that prevent women from reaching their potential. This is a valid criticism. One could say that she has placed onus on the problem of women and girls not envisioning themselves as competent for leadership. Sandberg herself, speaks of this in the opening of her book, confessing that some might accuse her of “letting institutions off the hook…blaming the victim.” But like Sandberg, I believe that “female leaders are the key to the solution.” Changing mindsets is the first step in shaping this revolution to close the leadership gap that exists between male and female. Sandberg therefore sets us up at the starting point for the race ahead.

Internalizing the revolution – My three takeaways

Embrace the F-word: A little over a week ago, I was sitting in a Women’s Leadership Roundtable event when a wave of panic washed over me. Had I become a feminist during my Humphrey year? What did this mean for my identity? A few days later, I read the last chapter of Lean In, and as I closed the book, I knew I wasn’t in crisis.

I have a torch to carry: Reading this book ignited a passion in me to join the movement to encourage women and girls to aspire to the highest levels of leadership. By embracing my role as a female leader, I can help to change the power structures and shape institutional reforms, which will in turn lead to fairer treatment for all women.

Equality is within reach: By carrying the torch, I can pay it forward, inspiring another generation of both men and women, closing the leadership gap and bringing us closer to the desired gender-blind future where “there will be no female leaders. There will just be leaders.”