Racism is defined as, “A belief that race is the primary determinant of human traits and capacities and that racial differences produce an inherent superiority of a particular race.” Throughout my life, I have yet to sincerely meet anybody who I would say has an attitude that fits that definition, leaving it incredibly difficult for me to believe that there is a significant amount of racial tension in my home country. Although it seems as though news stories that revolve around race in modern media receive a plethora of emotional attention, it still seems as though it isn’t truly something that’s happening, to me, no matter how long one or multiple news stations talk about a subject.

Racial tension in the United States is, in fact, alive. It’s likely to be alive to some degree in most of the world’s countries. However, at least in America, racial tension is nowhere near the level it was in previous years and has shown signs of progress, every year, since 1958. A recent Gallup poll shows that 87% of Americans now approve of interracial marriage. In 1958, that number was 4%. The world will continue to follow this path too. With my generation growing up during a time of acceptance toward other races, we will teach the masses who come after us to do the same. 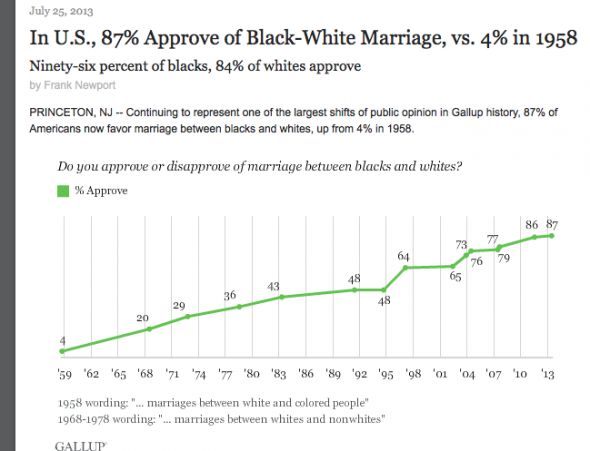 While it’s wonderful to image a near future where nobody considers their fondness of another based on their skin color, there is still a significant issue that deals with racial tension, today. While it’s true that millennials do not grow up with as much racial tension as the generations before them and, because of that, racism is much more scarce, the issue takes a different spin. Millennials, in stead, lack empathy toward racism and those who might have hurt feelings because of racism.

This past January, on one of Arizona State University’s most embarrassing moments in the school’s history, a fraternity hosted a party in which they claimed to be commemorating Martin Luther King Jr. Instead of doing anything even resembling a commemorative action toward MLK, the fraternity, “…mocked blacks by donning loose basketball jerseys, flashing gang signs and drinking from hollowed-out watermelons.” The party blew up on Twitter with the hashtags #MLKblackout and #hood being used to gain popularity. This is a perfect example of how racism is still alive today simply because of a lack of empathy. I don’t believe that these students were racist in the sense of judging and hating others for the color of their skin. Instead, these students had grown up with the idea of racism being a joke and, because of that, thought the idea they put together would be funny. They didn’t even take the time to consider how these jokes might hurt others because it is something that had never even crossed their mind.

Progress toward acceptance people of all races living together in a community free of racial tension is continually building. Today, though, students are introduced to the violent acts of decades of slavery and the Civil Rights Movement in history class and think that racism is gone because the displays of it aren’t nearly as extreme as they were during those eras. Mankind will continue to learn from these mistakes and, eventually, I believe America will become free of racism.