The entire period of researching leadership for me was a great confusion: shall I follow the others’ footprints or leave my own fingerprints? I do not remember who built the Temple of Artemis, one of the Seven Wonders of the world but I remember who destroyed it – Herostratus. He could build dozens of temples but still remain forgotten. What he did? He just burned the temple. The tragic part of this story is that people strongly decided not to utter the name Herostratus in order not to remember him. But all vain: he already left his fingerprints in leadership. And others started to follow his footprints: find a short way to reach the top or to make a binding decision. The overall description of leadership for me is Power. How to use this power? This is the dilemma that I have explained in this infographics. 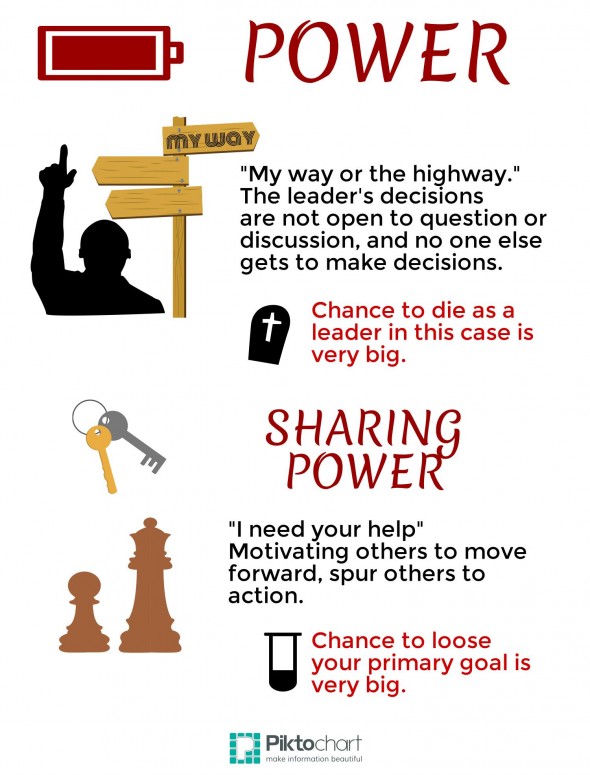 Both of these paths have their footprints already. Leaders who try to explore absolute power may “die as a dog” like Muammar Gaddafi, those who try share power may “escape in an usual way” like Viktor Yanukovych. In the book “Leaders, Fools and Impostors” the author Manfred Kets de Vries mentions one important point in feeling and losing the sense of power:

“When you are in a high executive position than you are surrounded by liars.” Manfred Kets de Vries

For me lie is an interesting version of corruption: leaders have not enough immunity against it. Leaders corrupted by lies look like high official corrupted by money and other resources – they may tell the truth but not the whole truth. They, like Herostratus, burn the temples; those who built those temples remain in shadow. Is it possible to be a leader without burning at least one temple? I do not have an answer. Is it possible to build a temple and be sure that there is no Herostratus around? Again, I have no answer. The leadership class I attended raised more questions for me rather than answers. I am thinking on having my fingerprints in leadership and not to follow one’s footprints. Fingerprints are unique for each individual: they describe one and only one person.