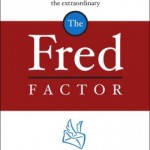 Mark Sanborn’s The Fred Factor is a wonderful read for anybody and can be a very useful guidebook on how one should live out his or her day-to-day actions. The basis of the book revolves around the story of Mark’s mailman, Fred. After moving to his home in Denver, Mark’s first acquaintance became his local mailman, Fred. Immediately, Mark was taken by surprise with Fred’s sincerity towards his customers and effort towards his job. Instead of the kind of building the relationship that one would expect from his or her local mailman, someone who just comes to drop off bills without saying much, Fred came up and introduced himself at Mark’s door. He then continued to try and get to know Mark simply out of curiosity and for the purpose of building the relationship. After discovering that Mark would be gone a lot because of his job, Fred devised a plan with Mark on how to keep his mail safe during stretches where he wouldn’t be checking for days.

Fred did all of this in his first acquaintance with Mark so that he could understand how best to serve Mr. Sanborn. This is the primary lesson that Mark tries to illustrate through Fred throughout the book. Those who want to do extraordinary work at their ordinary job can. The Fred Factor explains that every job is important and that one should strive to seek self-satisfaction in doing the best they can at their job. Instead of going through a daily checklist of how many houses he needs to get to in order to go home, Fred spends his time at work doing the best he can to serve his customers. Because Fred seeks joy from doing the best he can and not from the results he receives, he continually puts forth the extra effort to serve others and, at the same time, does not become hung up on results or dependent upon glory for his satisfaction.

Sanborn gives us many examples throughout the book of people who do the best they can at their jobs and make a difference in the lives of others because of that. He then dives into how to become a “Fred” yourself and then how to influence others into becoming Freds too. The book is a fantastic read and has many wonderful suggestions on how one should frame their mindset in terms of their job as well as other aspects in life.

For more information: The Fred Factor

To purchase the book: Amazon