“…a white police [officer asks] why I had been taking photos of the road block. I identify myself as a journalist; he appears irritated, refusing to be interviewed. Monday night had seen rocks thrown at police …A black woman is on her knees in the middle of the street with her hands raised and yells: Hands up, don’t shoot. Protesters chant as drivers [honk] horns.”
Daniel Fallon, The Sydney Morning Herald

‘If it bleeds, it sells’ goes the mantra underpinning media coverage and or exclusion of certain stories. This was manifest in the way global media reported on the Ferguson riots in August and November 2014.

White police officer Darren Wilson on August 9 shot dead unarmed black teenager Michael Brown, six American and international media outlets whose articles we evaluated, reported. Shortly before his death, Brown, in a video footage (below) that police released simultaneously as they named his killer, was captured on camera shoplifting cigarettes from a convenience store.

Referencing “white” and “black” in the reporting broadly framed the Wilson-Brown encounter more as racially motivated than a criminal act or an altercation gone-wrong. It also fitted in the account, bandied during public discourse at the time, that particularly black males — the majority in US prison, according to official statistics — were more likely to commit crimes and the public was justified to suspect or fear and therefore prop up self-defense against, rather than reach out to, them.

Of stories we gleaned, The Chicago Tribune focused more on the politics; police brutality and what it perceived as civil rights issues not well managed by politicians.

In contrast, The Washington Post comprehensively covered the riots but gave disproportionate prominence to disturbances by demonstrators compared to repression by law enforcement, focusing significantly on Brown’s shoplifting footage above. In one article authored by Paul Cassel, the newspaper headlined that officer Wilson had “powerful case for self-defense” under Missouri law.

Russia Today, the Moscow-centric even propagandist multimedia outlet better known by the acronym RT, excessively slanted its coverage to highlight militarized police response, writing sympathetically of demonstrators, including those who vandalized and looted in Brown’s name. It provided live reporting even when the incident was not geographically immediate to Russia. The live updates had no bylines, making it difficult to ascertain whether or not RT had reporters on the ground. Those stories had robust sharing on social media. 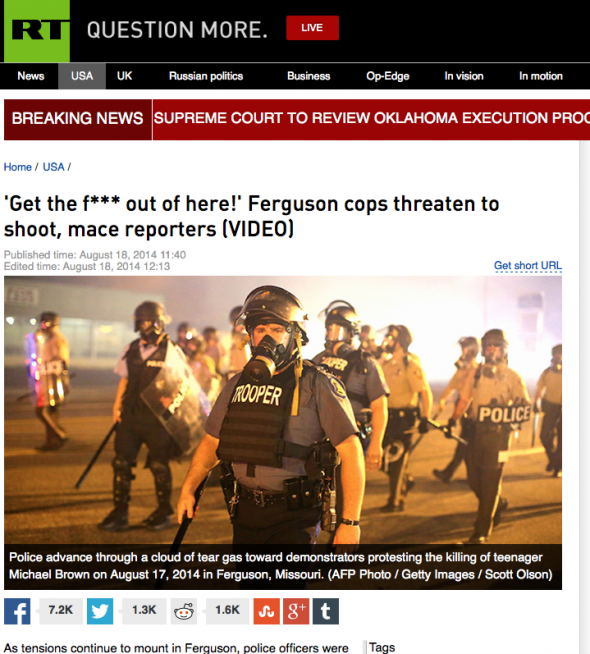 Ferguson police close in one demonstrators (not in picture). Photo Credit: AFP/Getty Images

The media outlet’s combative framing of the issues projected more the geopolitical flexing between Russia and the United States than just Brown’s death and follow-up riots. The stories made the case of America’s hypocrisy of internationally preaching virtues and democratic values it was failing to uphold at home.

There, however, was no monolithic reporting overall. Each of the six newspapers ran the story of the shooting and riots as well as jury verdict as the lead, used photos and videos for online multimedia visuals which made the story telling compelling. 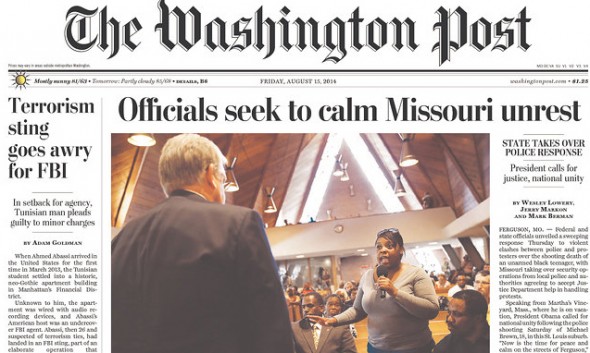 Some of the stories were enriched with ostensibly randomly selected public tweets, providing a broader perspective.
The Times of India relied on news agencies such as the Associated Press (AP), Agence France-Presse (AFP) and Reuters, publishing content tailored for an international readership. One of its headlines, for instance, was “Ferguson shooting: protests spread across US”, which underlined the challenges of race relations facing the world’s most powerful nation. It published pictures of Ferguson protesters setting a police car alight.

The contrast, diversity and rancor were evident in media coverage, reflective of individual media outlet’s philosophy. A race to break news in an evolving story such as Ferguson situation appeared to influence story angling and display.

The Los Angles Times took a more issue-based approach to generate national debate on police legitimacy and justice administration failure as well as arguments to value the lives and rights of African Americans. Almost all of its news and videos had a byline, meaning they had Reporters at the scene, and they covered all of the associated press conferences and public proclamations. 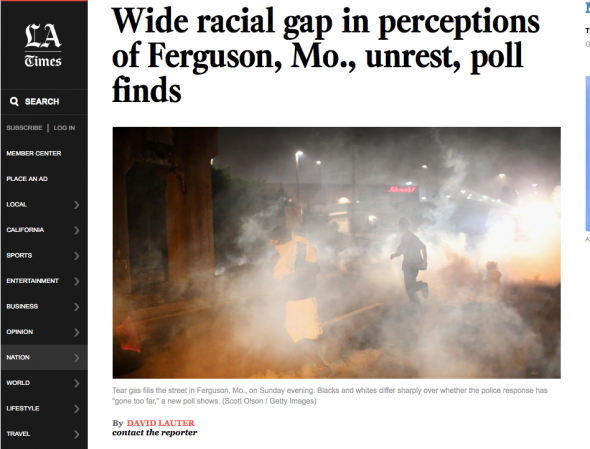 The publication of a poll finding as depicted in this screen shot was telling of the newspaper’s reporting focus on Ferguson riots. Photo credit: Tabu Butagira

Many Reporters on the ground appeared ill prepared or inexperienced to cover a volatile situation, with most without helmets or bulletproof flak jackets. Some choked in the teargas, were injured when pelted with stones or got arrested, albeit briefly.