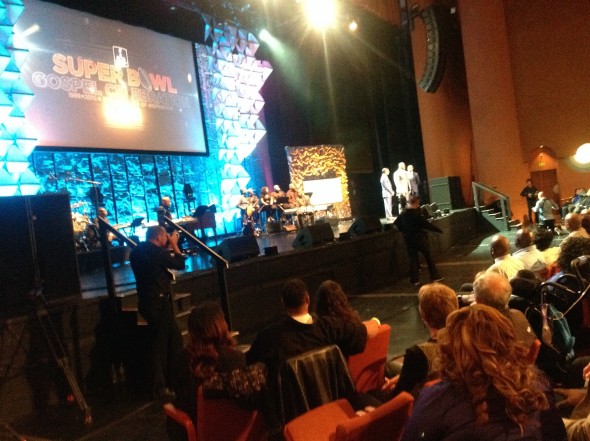 
Before I came to the United States, I knew nothing about the NFL. Well, it didn’t mean anything to me until recently. Although there was much preparation and enthusiasm around me, I was not moved until I got a first hand experience last week on Wednesday, January 28, when we (the Hubert H. Humphrey Fellows from ASU) did a site visit at the Arizona Center. That day spiked my interest; I had fun so much that I was now looking forward to volunteering services for the NFL’s Super Bowl for which I earlier exhibited little interest.

Two days later, Friday, January 30, I served as a Super Bowl Gospel Celebration (SBGC) Ambassador – and this is where I fell head over heel in love with my entire Super Bowl, NFL Experience here in the United States. SBGC, sponsored by American Family Insurance, was co-hosted by former NFL Quarterback Rodney Peete and his wife, American Actress Holly Robinson Peete. The Super Bowl Gospel Celebration (SBGC) is produced by its Founder / Executive Producer Melanie Few – Harrison, and sanctioned by the NFL. The SBGC was at the ASU Gammage, in Phoenix, Arizona.

The SBGC, in its 16th year now, is where football and faith team up for great time of inspirational music and messages, indeed! Some of America’s Gospel music greatest stars were joined by an All-Star “huddle up” of NFL legends and Super Bowl Champions from around the league.

The NFL Players Choir, which is the ONLY all NFL active and former Players Choir, Ministers Donnie Mcclurkin, Fred Hammond, Israel Houghton, Gladys Knight, Natalie Grant, among others, were all present to grace the occasion.

NFL Players, former and current, including Devon Still of Cincinnati Bengals, were there to share what inspires and motivates them on and off the field. Still received the NFL Inspirational Game Ball award, for strength and courage when his daughter received a stage 4-cancer diagnosis. Still described the recovery of his daughter as a practical demonstration of the Hand of God in “Our situation.” He continued that, his daughter illness of Pediatric Cancer united people during a time when people were so divided along the racial and social justice issues. The NFL Player then urged everyone to turn over whatever situations they were faced with unto God.

According to Ben Watson of the New Orleans saints, Gospel music gives the players positive messages to motivate them to give their all on the field.