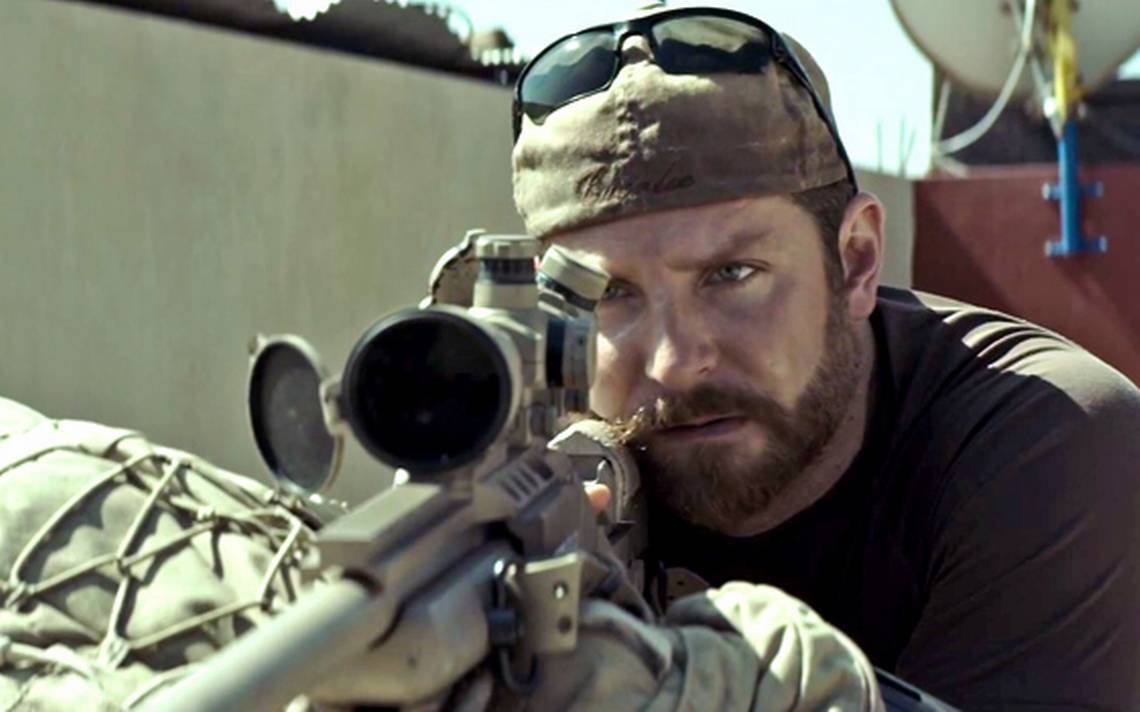 By Tamara Kraus and Vlad Odobescu

While in recent years Hollywood tried to extract the humans out of Batman or Spiderman, by breaking their bones and exposing their hidden family dramas, Clint Eastwood did the exact opposite in his recent American Sniper (2014). The hero of this 132 minute adaptation, Navy SEAL sniper Chris Kyle, doesn’t have many regrets and hesitations while pulling the trigger.

In an early scene, we see him as a boy, sitting at a family table, listening to a life lesson from his father.

Chris just had a fight with some bullies who attacked his younger brother in the school yard. “There are three type of people in this world,” starts his father, a Texan tough guy, “sheep, wolves, and sheepdogs”. The camera zooms in on a Bible, placed between some toy soldiers on the table. “Some people prefer to believe that evil doesn’t exist in the world. If there were ever dark on their doorsteps, they wouldn’t know how to protect themselves. Those are the sheep. And then you’ve got predators, who use violence to prey on the weak. Those are wolves. And then there are those who were blessed with the gift of aggression, with an overpowering need to protect the flock. These men are the rare breed who live to confront the wolf. They are the sheepdogs.”

“We’re not raising any sheep in this family.” He pulls his belt and puts it on the table. “And I will whoop your ass if you turn into a wolf. But we protect our own.”

It is the only option left for young Kyle and he embraced it. He became a Navy SEAL in 1999 and became the deadliest sniper in the US military history, with 160 confirmed kills during four tours in Iraq. He proved himself as a brave soldier, willing to sacrifice for those around him, and was awarded some of the highest honors in the US military, including the Bronze and Silver Star. But is that enough to make him a hero?

As noticed in an article published by Slate.com, the transparent symbols of sheep, wolves and sheepdogs do not originate from the autobiographical book that inspired the movie. The analogy was first used by Lieutenant Colonel David Grossman in his book On Combat, published in 2004, and it was often used by supporters of the wars in Afghanistan and Iraq.

As Grossman makes it clear,

The sheep generally do not like the sheepdog. He looks a lot like the wolf. He has fangs and the capacity for violence. The difference, though, is that the sheepdog must not, cannot and will not ever harm the sheep. Any sheepdog who intentionally harms the lowliest little lamb will be punished and removed. The world cannot work any other way, at least not in a representative democracy or a republic such as ours.

As any sheepdog described above, Kyle doesn’t seem to know nuances. He repeatedly refers to his enemies in the battlefields as savages. And he knows how to stop them from attacking another American city and killing innocent people. “We killed the bad guys and brought the leaders to the peace table. That is how the world works,” wrote the soldier in his memoir book. He is convinced that if he and his comrades wouldn’t be there, on the battlefield, his cities would become easy targets for terrorists.

Eastwood seems to fully support this vision and he doesn’t do any efforts to be politically correct or to make further judgements on his character’s actions. As mentioned in a review published by The New York Times, “the film’s narrow perspective, centered on Kyle, is both the best and worst thing about it. American Sniper may be a much needed tribute to the sacrifice of American soldiers, but it’s lacking context. Few Iraqis here are seen as anything but the enemy”.

The flows in the analogy of sheep, wolves of sheepdogs are visible, we don’t even need to look very far. On February 2, 2013, Kyle is murdered by Eddie Ray Routh, a 25-year-old U.S. Marine Corps veteran from Lancaster, Texas, who suffered from PTSD and schizophrenia. Is Routh a wolf, a sheep, a stranded sheepdog? The murderer is, at least in some measure, just another victim of the war.

Though Eastwood is creating an idealistic image of his character and many reviews criticised that, the veteran director seems to be consistent here with the real-life Kyle’s representation of war. “I hated the damned savages I’d been fighting. I always will,” wrote the former soldier, as he explained why he tattooed a crusader cross on his arm, between two deployments in Iraq. In American Sniper, the pure evil is represented by men using drills as weapons of choice against children, silhouettes disappearing into the night, leaving severed heads behind them, or a Syrian silent sniper dressed in black who is killing Kyle’s comrades one by one.

“In failing to interrogate the raw matter of Kyle’s book, [the movie] simply decides to print the legend instead,” The Guardian’s Xan Brooks wrote. The political reasons behind the war are not questioned at any moment. For instance, how did Kyle end up in Iraq? We just see his wife terrified by watching the towers falling on 9/11, and very soon after that he is in Iraq, fighting the bad guys.

However, while Kyle on the screen has a tear in his eyes when he has a little boy on target, the real Kyle didn’t seem to have lived such hesitations.

“After the first kill,” Kyle wrote, “the others come easy. I don’t have to psych myself up, or do something special mentally — I look through the scope, get my target in the cross hairs, and kill my enemy, before he kills one of my people.”

It is a world of sheep, wolves and sheepdogs, with an American flag waving in the background.

The problems in his personal life – a marriage that seems to fall apart due to his insatiable appetite for war, the fight with PTSD – are in the background, as well. He is stone-still on the couch as he is watching war scenes on a TV set that is turned off. There is a scene – intensely mocked both by spectators and critics – where Kyle is holding a plastic baby. Though the presence of the fake baby was the result of an acknowledged incident (the real baby had a fever), it might be as well a good metaphor for Kyle’s perspective over those around him.

“The biggest anti-war statement any film” can make is to show “the fact of what [war] does to the family and the people who have to go back into civilian life like Chris Kyle did,” Clint Eastwood explained, when he was asked if American Sniper is a pro-war film.

Furthermore, the script doesn’t insist on the other major battle Kyle had to carry, against PTSD. When he returns from the last mission in Iraq, the wounds seem to cure miraculously. He just needs to be around his former comrades, he finds a purpose in helping them. It makes sense, but the movie doesn’t develop this process.

If a hero is judged only by the good nature of his intentions, the central character of this movie surely is one. But the many shadows of his life – as of any life – are barely depicted in this movie. Chris Kyle was a sheepdog, as his father wanted him to be. But he might have had something of a wolf and of a sheep as well.

3 Comments on “American Sniper: Of Sheepdogs and Men”