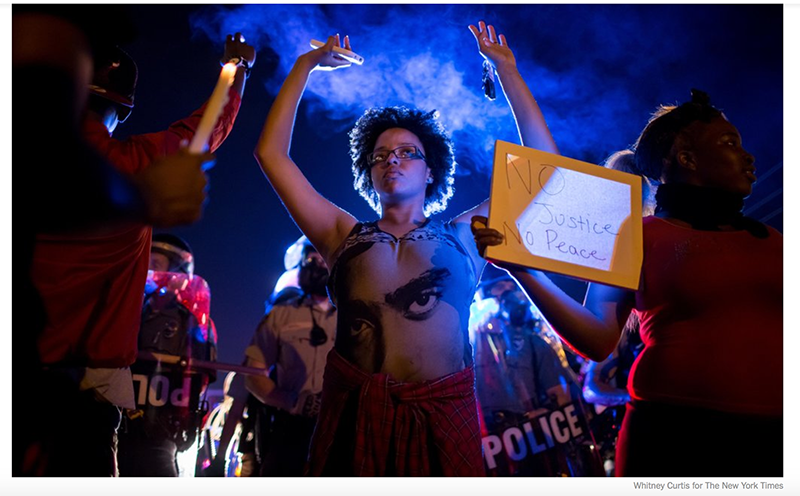 By Travis Arbon and Rajneesh Bhandari

Just as different media outlets reported on Ferguson differently, audiences had varying reactions to the coverage and how it influenced their perception of racial injustice. According to a Pew Research Center study of U.S. attitudes toward race, more people now believe that “our country needs to continue making changes to give blacks equal rights to whites.” However, there remains a massive chasm between how white and black people view the state of racism in the U.S..

What’s even more intriguing is that prior to the past year, a slim plurality of Americans believed that the country had changed enough to give black people an equal playing field. The vast majority of black people did and still do believe that the country must continue to make changes. But before 2015, 59 percent of white people thought we had done enough for racial equality.

Furthermore, 50 percent of respondents now consider racism a “big problem,” up from just 26 percent in 2009, according to Pew.

So, even though different media outlets had different coverage of Ferguson, the overall effect on people’s attitudes toward racial injustice has been a positive one. This suggests that the media still has a critical role to play in exposing discrimination, educating populace and inspiring people to find solutions.

That being said, certain aspects of that coverage were problematic and did not achieve those goals.

Social media played a huge role in both the distribution of each publication’s content and in the actual reporting. The Ferguson event went viral on Social Media before it became a mainstream media story.

Thanks to social networks, we instantly got thousands of different perspectives from protesters, reporters and officials. The social networks we engaged with over the course of the protests undoubtedly helped shape our individual reactions.

In the traditional reporting arena, news media around the world reported Ferguson event differently. In this blog we analyzed how media outlets framed the Ferguson event. We randomly chose the media outlets, from the New York Times to Aljazeera, Chinese Xinhua wire to Nepalese Kantipur Publication, Guardian to BBC, and Fox News to Russia Today for our observation.

Many media portrayals of the events focused heavily on the violent aspects of the protests, as well as the police response. There was not a great deal of coverage dedicated to generating conversations about race or underscoring the problems facing black Americans.

One outlet that did focus on race was AlJazeera. They produced in-depth stories about race in America and also published analytical opinions online. From half-an-hour documentaries to AJstream, the event made many headlines highlighting the injustice faced by the African Americans. They also went on critically evaluating
how the media reported the event and also the difficulties faced by media.

Meanwhile, outlets such as Russia Today did not do a great deal of original reporting. Instead, they simply compiled images and reports from other outlets. This resulted in stories that, while visually rich and connected with social media, lacked any understanding of the deep-seeded issues at play in Ferguson. RT portrayed the protests as an overreaching government trampling freedom of press and assembly, and not as a symptom of hundreds of years of racial tensions.

China’s government press wire Xinhua covered the event from Chicago and Washington and one of its commentary termed Ferguson tragedy a slap on US’s human rights records.

Nepalese top media outlet Kantipur covered the event only through wires. They used feeds from AP and Reuters.

FOX News gave a decidedly pro-police portrayal of the events, making sure to qualify certain pieces of information that were anti-police, in order to discredit them. In one FOX News story, every aspect of Darren Wilson’s account of the shooting was explored in great detail, and other perspectives received comparably less detail. A one-year retrospective published by FOX lamented the growing anti-police sentiment of the last year, and largely ignored the underlying racial tensions.

The main principle of journalism is to report the verified truth. While reporting critical issues journalists should maintain higher level of professionalism and abstain from stereotypes so that the actual voices are reported accurately.

We should also understand the incredible power that we have, as journalists, to change people’s perspectives. Through social and multimedia, that power is greater than ever. While we should always hold accuracy and honesty as our highest principles, we should recognize situations where we can effect change. Our responsibility to hold people accountable doesn’t end with governments and corporations. It extends to the social ills, such as systemic racism, that many would otherwise choose to ignore.

Once we recognize that power, we also realize that the current state of affairs is unacceptable. When events like Ferguson are still possible, and when the roots of racism still spread, we can’t be content with just 59 percent believing that more needs to be done. There’s a long way to go toward educating our communities and we can’t stop now.

4 Comments on “Media Has The Power To Conquer Social Ills”