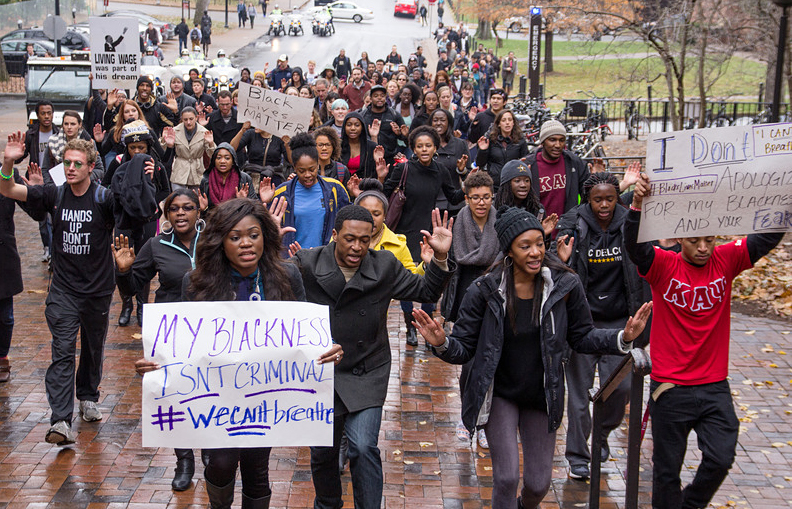 Journalists have the power to encourage audience to walk at least a mile in someone else’s shoes by watching TV or written reports about racism. It is not a big surprise to learn how great role race plays in your own life when an artist, parent, teacher, boss of color can contribute with a variety of talents to the whole society. The only question that resonates is whether media cares about race.

Spencer Piston, a professor at the Campbell Institute at Syracuse University, examined how young whites ranked the intelligence and work ethic of whites to blacks. He finds that 51 percent of whites between the ages of 17 and 34 rate blacks as lazier than whites, and 43 percent say blacks are less intelligent. The data also shows that whites aren’t very different from their parents, which means that stereotypes are perpetuated and that media role has been insignificant to change this type of mentality.

The various news outlets I turned to for information shaped my perception of Ferguson, as a college student in the U.S. Sometime in the months after the shooting of Michael Brown, the Missouri teen who was killed by police in August 2014, I remember coming home to my parents’ house and being frustrated with their interpretation of the events. My family watches the conservative-leaning Fox News exclusively, and regularly, so it wasn’t surprising that we had different views on all that had transpired in the wake of the shooting. But during our discussions, it seemed we were talking about separate events altogether.

A lot of the news I read was framed in the context of racial injustices that have existed in Ferguson for years. It was mostly online, from sources like The New York Times, Al Jazeera, The Atlantic and (the admittedly wildly liberal social media site) Tumblr. I watched CNN broadcasts in passing in the Cronkite building. I followed Ta Nehisi­Coates on Twitter. And as the questions of reparations, discrepancies in police force vs. population demographics, institutionalized racism ­­ and media coverage of all of these issues ­­ filled my mind, my dad expressed a pointed and passionate outrage toward different aspects of the news.

His anger that those protesting had the audacity to loot buildings, disobey police and cause more violence was reflected in the vitriol of the pundits he watched every night. And while the post shooting violence was certainly an important chapter in all that happened in Ferguson, my dad’s frustration ended right there. He had no context of the injustices that led up to the violence in Ferguson, and he seemed to view the riots as a justification for the shooting ­­ a confirmation that Ferguson was a messed up place where black protesters were waiting for an excuse to create violence.

A young man was shot, people protested, stores were set on fire. But aside from these basic facts, it seemed my father and I had no general body of information through which we were interpreting the impact of Ferguson. Like everyone who consumes media, the contexts we were provided shaped our opinions of the events and our world as a whole.

The way news media in the U.S. frames race directly contributes to political action (or lack thereof) and the way we all communicate with each other. In this blog post, we’ll look at some of the ways racial issues, including Ferguson, were covered by various outlets in the U.S. and abroad, and how framing reflects preconceived agendas, and shapes the way communities ­­ locally and globally ­­ interact.

Ferguson coverage in the U.S:

On the day of the shooting, The New York Times covered the breaking news in a standard way, pulling the story from Reuters, describing known details of the shooting and the subsequent looting. A story which ran the day after the shooting identifies Brown as black in the first graf, giving the context a racially ­focused framing.

The story’s mention of demonstrations that day give further detail about the environment that led up to Brown’s death. In the 2­3 days after the shooting, The New York Times pulled information from a variety of sources including police, government officials and those who knew Brown.

One year after the shooting, the Times ran in ­depth pieces about whether changes had occurred in Ferguson as the anniversary of Brown’s death approached. Published four days before the anniversary, the piece does well to combine analysis of the political climate and demographic statistics with the voices of those involved in the Black Lives Matter movement. The framing of this story paints a thorough picture of the social and bureaucratic complexities with which the community was dealing after the shooting, with specific sections on the commercial, community and legal angles.

On the anniversary of Ferguson, Fox News provided a comparably cursory update on the events (with no heavy context on injustice. Their website provided editorials that framed the situation as one of disrespect toward police rather than societal inequity, with one headline reading: “Ferguson one year later: It is now fashionable to vilify police regardless of the facts.”

Social media outlets were criticized for the pictures they chose to use of Michael Brown as details about the shooting were being uncovered. Critics said the photos used ­­ ones of Brown displaying hand gestures and scowling ­­ painted Brown in a negative light, giving a subtext to the story that was unfair. The hashtag #IfTheyGunnedMeDown became popular nationwide as people drew attention to how pictures frame stories.

In a popular clip from The Daily Show, Jon Stewart criticized Fox News’ coverage of Ferguson for what he called a double standard.

Ferguson coverage in other countries

Global news coverage of Ferguson largely reflects the relationships other countries have with the U.S. as media outlets framed the events in the context of the U.S.’ actions on the global stage.

A story from Al Jazeera looks at content about Ferguson from a range of different outlets in various countries. The article mentions how Iranian and Russian news sites frame ferguson in the context of their own relations with the U.S. and highlight Washington’s hypocrisy.

An Egyptian news site (said its country’s leaders were closely following Ferguson while urging the right to peaceful protest. A Brazilian outlet framed the events in the context of commentary from UN Secretary General Ban Ki­-Moon while a German columnist focused on the similarities between race relations in the U.S. and those in Germany and the disparities brought into public light through #IfTheyGunnedMeDown. Finally, a Chinese media editorial called the events of Ferguson a human rights flaw and pointed out the hypocrisy of the U.S. advocating human rights in other countries while having such issues domestically. The piece also mentions the Edward Snowden leaks revelation that the U.S. uses drone attacks abroad.

It is surprising to look over the course of 50 years back in American history and still observe the dominant trend between African Americans. Differences between blacks and whites in income, wealth, and education were vastly larger 100 years ago than they are today, and they’ve narrowed over time pretty persistently.

Still, some media in USA, such as PBS, CBS, CNN, USA Today try to bring up the dialog about racism in the news, that followed the release of a video where members of the University of Oklahoma’s Sigma Alpha Epsilon (SAE) chanted racist slurs. It is happening nowadays in March 2015, when the clip was anonymously published in a school newspaper and a campus organization. The students on the bus clap and pump their fists as they boisterously chant, “There will never be a ni**** SAE. You can hang him from a tree, but he can never sign with me.”

The video, which reached over 3 million viewers, was a demonstration of blatant racism many believed no longer existed among a younger generation. The university’s president David Boren quickly condemned the students. Later, at a press conference, Boren said “one of the things that breaks my heart about this” is that the school is actually a diverse and tolerant community.

The national fraternity’s decision to come up with such a post came on the same day thousands of people gathered in Selma, Alabama to mark the 50th anniversary of “Bloody Sunday,” a day in 1965 when peaceful protesters marching for voting rights were beaten by police. Immediately after the video was posted, an outpouring of tweets echoed the sentence “Racism is alive at the University of Oklahoma.”

Robert Margo, the Professor of Economics, Department of Economics, at Boston University says for PBS that he grew up in Detroit, and remembered the 1967 riots. “They were very severe. Many people killed, huge amount of damage. And the damage was concentrated in what was the heart of the African-American business community at the time”. Fifty years later, these words are just as true now as they were then.

Personal social networks seem highly segregated and allow racist comments because 75% of white Americans do not have one non-white friend. Wealth and income inequality is also visible when white Americans have at least 10 times the wealth of black Americans.

If more journalists of color worked in newsrooms, probably the situation of White and Black America wouldn’t look as racist as it seems to be. Television newsrooms are nearly 80 percent white, according to the Radio and Television News Directors Association, while radio newsrooms are 92 percent white, according to Sally Lehrman, former chairwoman of the diversity committee at the Society of Professional Journalists.

People do look different, but does this mean that they need to be treated differently? Even if race is not considered a biological issue, racism is still seen real in the USA, which reduces the chances of people of color to have equal access to opportunities and resources. The impact of American media on changing stereotypes and advance social policies on political debate is essential.  In the end, racism affects everybody because when one part of the population is withdrawn outside the system, the consequences of such a discriminatory policy reflect the overall life conditions of American society.

3 Comments on “50 years after “Bloody Sunday” attacks, racism still alive in the U.S.”