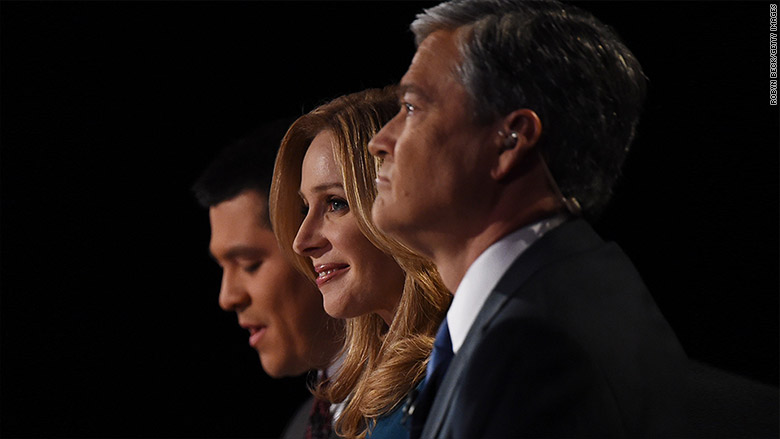 People who want to be president of the United States should be able to answer tough questions. ~ CNBC Communications VP Brian Steel ~

The third Republican debate was marked by fantasy football, cage matches and a full-scale war between debate moderators and candidates. Although the fourth estate and politicians have been at one-anothers throats since the beginning of American democracy, this particular quarrel has both press and public ranting against CNBC.  Like Sheriff Joe Arpaio’s media circus in The Joe Show, the third Republican debate shows how politicians have a manipulative hand in the press pie.

You can view the complete two-and-a-half-hour debate below or watch CNBC’s fantastic three-minute highlight reel.

While I was proud of our candidates and the way they handled tonight’s debate, the performance by the CNBC moderators was extremely disappointing and did a disservice to their network, our candidates, and voters…. CNBC should be ashamed of how this debate was handled. ~ RNC Chairman Reince Priebus ~

I’m staggered by the overwhelming outcry against the CNBC moderator handling of the debate. In fact, because the GOP has cut ties with CNBC the network may not host a Republican debate for several election cycles. Now, the GOP can make these kind of PR decisions like a business and choose through whom it sends its news, but what upsets me is how so many prominent media organizations and personalities have jumped on the “shame on CNBC bandwagon.” Criticizing everything from the tone of the questions to which candidates had the most speaking time, commentators have ripped apart the debate and declared the whole affair poor journalism and a liberal scheme to discredit conservative candidates.

What I saw were serious, outside-of-the-box questions that tried to provoke a different kind of debate. Big issues like the economy, immigration, ISIS are so overworked that any time a candidate answers, it’s like they’re all reading from the same, hyper-patriotic book of populist sound bites: “Yadda yadda yadda GO AMERICA!” Yet at the end of the tirade we learn little about the candidate, their real stance on the issue and the policies they’d encourage to achieve that goal. On the other hand, who prepares to debate fantasy football? It’s a relevant, timely issue that indicates broader policy philosophies that often disappear under the debate radar. Instead of a memorized, preachy answer, candidates either dodge the questions and look like an evasive buffoon or speak off-the-cuff and from the heart. To his credit, Gov. Jeb Bush gave a compelling answer to the question, which died when Gov. Chris Christie irately chimed in:

Likewise, Quintanilla’s opening question asking candidates to identify their biggest weakness and name the steps they’re taking to work on it is completely valid. In fact, it’s brilliant because it’s so hard to dodge. This is a great chance to be open and honest, right?

In fact, this questions drew an unbelievable amount of heat from journalists, the public and the candidate themselves, who gave ridiculous answers. Former Arkansas Governor Mike Huckabee LITERALLY answered “I don’t really have any weaknesses that I can think of”. Trump: “I trust people too much”. Fiorina: “At the last debate I was told I didn’t smile enough.”

What’s the lesson? If your debate actually confronts hard issues the candidates won’t play ball. In fact, the GOP is putting together new debate format that will end “lightning rounds” and actually ban certain camera angles. Sure, CNBC didn’t handle the debate perfectly and there are questions the moderators could have definitely polished, but the debate and CNBC don’t deserve the political black eye the GOP gleefully delivered. At the end of the day, I’d rather see my favorite candidate torn apart on live television than to see the press silenced. Journalists should see the storm coming. Today it’s CNBC but tomorrow they’ll be picking the questions. Debates are job interviews, not a Miss America beauty pageant.

The only thing that made me laugh about Friday’s debate was Democrat contender Hillary Clinton’s live tweeting of the debate. At least someone’s having honest fun.