As one of the youngest journalists in the Balkans newsroom, I started to work for Aljazeera in 2011. During my first 6 months, we were trying to learn Aljazeera’s new style of reporting and practice in journalism using new software and programs with the aim to make the best news for 20 million people in the Western Balkans region.One of the first tasks was going out on the street and asking people if they had ever heard of Aljazeera and what they thought of Aljazeera’s reporting style.

Kuda i kako dalje u pregovorima Srbije i Kosova? | Kontekst

A woman in her 50s said: “Aljazeera is coming. Well, tell them they should be prepared. We also have a great military”.It was obvious she did not have any idea what exactly Aljazeera was. Instead of that, I suppose, she thought of Al-Qaida.My first impression was “All that glitters is not gold”. In this case that would be- if some organization has a name starting with “A”- it is not always Al-Qaeda, and “J” is not Jihad.  In a post conflict region such as the Western Balkans, I believe regional media such as Aljazeera Balkans, has done more on the reconciliation process than officials in the last 25 years.For the first time after the war in ex-Yugoslavian countries, my television crew tried to prepare objective, accurate, and clear news for a diverse audience by giving them broader perspectives and confirmed sources. Unfortunately, for many Serbs and Croats in my country of Catholic or Christian orthodox religious background, Aljazeera presented a “TV channel shaped by Muslim authorities”.When I try to explain why I like to be part of this international media outlet, I repeat Aljazeera’s moto: “ Giving the voice of the voiceless. 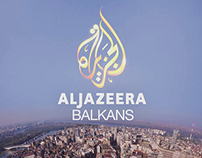 ”This sentence, the highlight of our reporting, is at the root of my belief that dialogue and communication is essential for reshaping my country into a democratic, progressive part of the EU.I believe media is not a channel for fighting terrorism; media is just our mirror, obviously shaped by our stories and our thoughts.  My Humphrey year brought an unexpected surprise on the very first weekend in Phoenix. During the celebration of the 19th amendment, 97 years since women in the U.S. won the right to vote, I saw more than 20 women run for different offices— from the school board to the Senate. One of them, Deedra Abboud, is a Muslim woman—and is running for Senate. I researched her, asking myself how hard it is for a woman, most of all a Muslim woman, to be a Democratic candidate in a typically Republican state such as Arizona.I found the headline: “ Meet the Muslim, pro-gun Democrat who’s running for a Senate seat in Arizona” at AJ+, the sister company to Aljazeera Media Network.

Abboud said, “Muslim issues have been demonized, dehumanized and misinformation has been profitable. I am getting to go out and talk to people. Women’s issues, Muslim’s issues, but people of color’s issues, healthcare issues, education, internet privacy…” I was thinking all day about her words. In my mind suddenly came the idea that American society deals with a lot of issues in their country with different perspectives and possible solutions.However, terrorism should not be “ ours” or “ theirs”—it does not recognize barriers and boundaries. Terrorism does not choose just white or just black people; it doesn’t attack men and skip women.Terrorism—in every single case, in every country, in every education system, government…in every house, church, mosque, etc.—must be solved with a better understanding, dialogue and peaceful negotiation.  Dialogue is a key.

View all posts by Marina Ridjic →