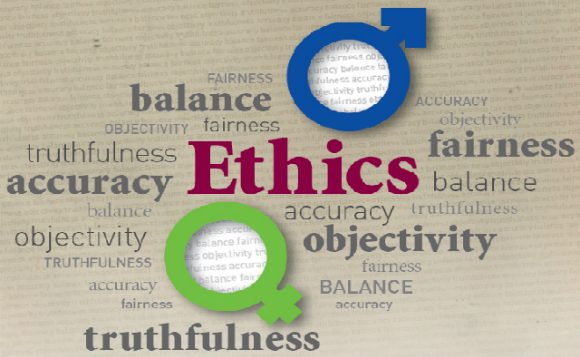 Why is ethics so important in journalism? The key word here is trust. As a journalist, that trust you earn from the audience is all you can count on. It´s the only capital a journalist can gather through it´s career, and it´s the big difference between success and failure in this profession. As it´s been said many times, trust is something that takes years to conquer, and seconds to lose.
Probably like never before, the basic ethics of journalism has been under fire. Attacked by politicians that never liked our role as counter balance of their power, by the change in business and the proliferation of things like native advertising. And by the overexposure generated by social media. So earning and keeping that trust from the audience is harder than ever.
This brings me to an issue that has surfaced a couple of times during my stay in Cronkite, and that is the limit between what´s considered “objective” and what we could call “opinion” journalism. I have heard many times professors complain bitterly about the loss of those glorious times where people like Walter Cronkite would talk to the country from above political party lines, that would be heard and respected by people of all visions. And how these times of partisan cable tv news are hurting the profession. It stays clearly on my mind a presentation of professor Pucci where she explained how students were not allowed any kind of personal expression, when handling social media acounts and in their journalistic work.
Even though I can relate to the old timers feelings having spent all my life in a newspaper, I think it´s useless to keep crying for the past. We have to address the challenges of the present. And one of the biggest challenges we have now as journalists is to make our voice heard, identified, and respected. In times when information has become such a cheap commodity, a journalist needs to have an identity, to brand himself, in order to be noticed in the chaotic sea of today´s news landscape.
This means that you need to have a voice. You need to develop a personality. You need to expose yourself, your values, your vision, your stance. Audiences no longer want an impossible neutral journalist acting like if he was a robot with no feelings and no passion. They know no one is really like that in real life, and they can´t trust you if they suspect you are forcing yourself to be something you are not.
So the key word here is not objectivity. It´s honesty.
Audiences are willing to accept a journalist that has different political visions, as long as they are honest with what they say, with how they cover issues, and especially as long as they don´t suspect that you are altering reality to fit into your own ideological frame.
The big problem with this is that it demands that journalists have a bigger ethical sense probably than ever. We are journalists, not activists, not politicians, not salesman. We need to know the limits of our work, and that we are here to serve our audiences, no to convince them. Not to make them aware of anything.
And these limits can´t be taught. As ethics can´t be taught. The biggest challenge we face today is to develop our own sense of ethics, one that is compatible with the one our audiences demand. And to be honest with it even under the toughest circumstances.
If we manage to do that, a good part of the walk to become a successful professional, would have ben walked.