I had brought three copies of Mahatma Gandhi’s autobiography ‘My experiments with truth’ along with me from India as souvenirs. I got the opportunity to read one of the copies as part of the presentation on leadership. 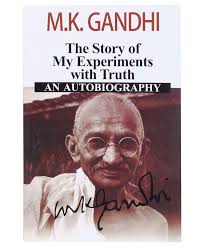 And what an insightful pleasure it was! I had first read the book as a teenager and it had deep influence on my young mind. Reading it again after 20 years helped reinforce some ideas and enabled me to look at some others differently.

Gandhi is India’s tallest leader. But even as I say that – I guess he was more of a spiritual leader rather than a political one. Securing freedom from the 150-year old British rule through the simple but effective means of ‘Satyagraha’ or Non-violence has been a political innovation. Little wonder, that he inspires the whole world even today – although most of it cannot or may not want to emulate him.

His beliefs in today’s age almost seem to be impossible, untenable and unrealistic. But there is a big void that can be filled by actions inspired by what Gandhi said and how he lived his life.

Simplicity, piety, abstinence from wrong doing, non-violence, respect for all religions & people, love for nature and empathy for mankind are the hallmarks of Gandhi’s ideology. He is the man who called for ‘being the change that you wish to see’ and his life has indeed been very exemplary in every regard.

Am I a leader? Can I be a leader? These are the questions that came to my mind as I was working on the leadership presentation. These are natural questions to ask – although I wonder how many will believe in their answers to themselves.

Leadership for me is about doing the right thing, believing in Karma, being empathic, remaining positive irrespective of the challenges, taking a stand even if it does not make everyone happy, working hard and above all being humble and genuine – principles espoused by Gandhi.

I also strongly believe in being different than the rest – not following the herd and discovering one’s niche. At a time when most colonies were fighting their way out of the British rule, Gandhi advocated non-violence and non-cooperation and was also able to mobilise millions of Indians to rally behind him on this chosen path.

Cutting the clutter is so important these days – especially when so much clutter is being produced every split second on the social media. Being genuine, original and confident in a world which is increasingly turning superficial and transactional is difficult but important.

I see myself as a thought leader in public service – especially in India where there is a huge requirement of leaders who are ready to undertake self-less service at the grass root levels. Unfortunately, they don’t make Gandhi any more. But thankfully, we all have a Gandhi hidden inside us – we only have to bring it out.

Besides, awareness is the first step towards change. And this fellowship year for me is the process of bringing out the Gandhi in me.