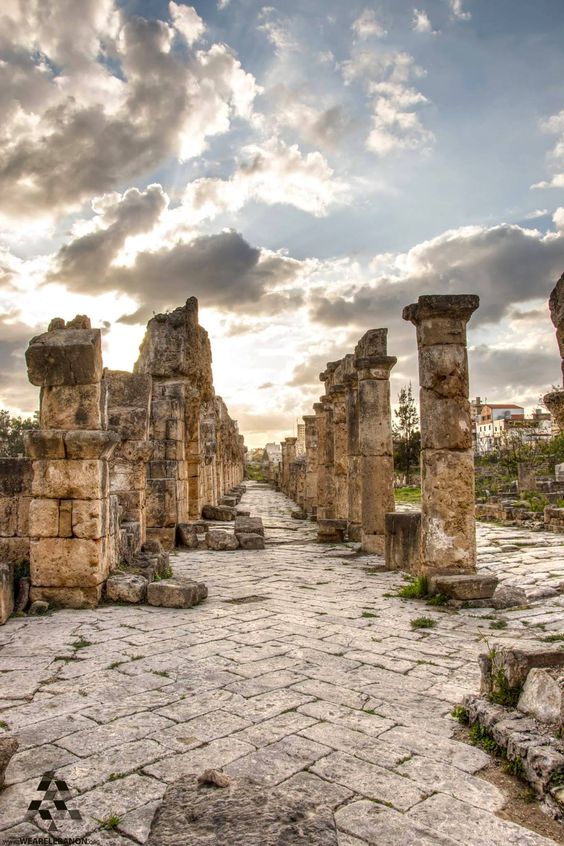 Lebanon’s earliest evidence of civilization is as old as mankind. It dates back to periods predating recorded history; and with over 5,000 years of recorded history, the country is a treasure trove of archaeological wonders. Most historical sites have layers upon layers of ruins — each layer uncovering the story of another civilization that inhabited this ancient land.

Let’s take this trip through the annals of some of the world’s greatest civilizations!

The Canaanites who inhabited that area were called Phoenicians by the Greeks, in reference to the unique purple dye the Phoenicians produced from murex seashells. Phoenicians mastered the art of navigation and dominated the Mediterranean Sea trade for over 500 years. They established trade routes to Europe and Western Asia, with their ships circumnavigating Africa as well. Around 1600 B.C., the Phoenicians invented the alphabet, creating the foundation for the modern English alphabet and other alphabets. They organized a system of 22 consonants into what became the alphabet used not only by English speakers, but by speakers of many of the world’s languages. Their alphabet spread through their vast trading network that stretched throughout the entire Mediterranean region. This alphabet was adopted later by the Greeks who added vowels to it.

The Phoenicians adjusted to successive conquerors such as the Assyrians, Babylonians and the Persians, yet managed to keep their trade business ongoing keeping a sort of political independence.

Realizing the importance of Lebanon as a strategic gateway to the Mediterranean, Alexander the Great led a 7-month siege at Tyre, sparing no effort in invading the area. By that time, Ancient Phoenicia was absorbed into the Greek Empire, and Greek customs and language were adopted.

The Romans then took over Phoenicia. During that era, economic and intellectual activities flourished. The inhabitants of the principal Phoenician cities were granted Roman citizenship. Economic prosperity led to a revival in construction and urban development; temples, palaces and the first School of Law in history were built throughout the country, as well as paved roads that linked the cities. Ruins of Roman temples and monuments are still found all around Lebanon until today, with the largest in Baalbek City. The 5th century witnessed the birth of Maronite Christianity. Saint Maroun (also Maron) found a refuge in the northern mountains of Lebanon. At that time, a great portion of the Phoenicians became Christians, and their faith was named for him. Maronite Catholics later made great contributions to the Lebanese history, independence and culture.

With the split of the Roman Empire, the Byzantine era in Lebanon began. Commercial and intellectual growth in Lebanon’s cities continued during this era.

The Arabs took Lebanon from the Byzantines, and the 7th century started the shaping of the multi-cultural Lebanon we know. Under the Arab rule, the region of Lebanon became a refuge for many ethnic and religious groups escaping persecutions. Lebanese mountains became more populated especially by the Maronite Christians. However, the followers of the new religion of Islam also fit coherently in the community since most of them were not migrants, but locals who converted to Islam. As the Arab Muslims conquered the region, the Maronites held onto their religion and identity. While the Roman Empire army fell facing the Muslim troops, the Mountains of Lebanon stood still, and Arabs had to pay Maronite Christians financial tribute to stop their raids on their troops. During this era, Arabic was established as the official language of the empire. Arabs are still remembered today for their excellent city administration and planning, and their patronage of early Islamic art and architecture.

As Arab leadership fragmented, the Christians of western Europe undertook a series of ‘crusades’ to recover the Holy Land from the Muslims. After capturing Jerusalem, the Crusaders turned to the Lebanese coast. Although they failed to establish a permanent presence, the Crusaders left their imprint on Lebanon’s numerous archeological remnants (towers, castles and churches) scattered along the coast and in the mountains.

Following the Crusaders, modern-day Lebanon, Syria and Egypt came under the control of the Mamlukes. The Mamlukes were originally bodyguards for the Egyptian Ayoubid Sultans. Many Shiite Muslims migrated to Lebanon during this period, and there were increasing religious tensions. After a number of rebellions near Beirut were crushed, the Shiites moved to settle in Southern Lebanon.

In the 16th century, the Ottoman Empire dominated the Middle East and Eastern Europe for the four centuries preceding World War I. The term Greater Syria was coined to designate the approximate area included in present-day Lebanon, Syria, Jordan and Palestine. The Ottoman Empire ruled Lebanon through local leaders; hence, Lebanon managed to get conditioned or total independence several times under Ottoman rule.

During the second half of the 19th century, Lebanon became an intellectual and commercial center. Foreign missionaries established schools throughout the country – the American University of Beirut was founded in 1866, followed by the French St. Joseph’s University in 1875. Arabic literature had renaissance era marked by numerous publications where Lebanese authors outshined. It was the Lebanese first prolific press in the East that managed to preserve the Arabic literature from distinction under Ottoman oppression.

However, after the outbreak of World War I in August 1914, the Ottoman forces in Syria occupied Lebanon and appointed a Turk ruler over the country. The Lebanese refused the occupation, and the Turks responded by commandeering Lebanon’s food supplies causing famine and plagues. More than one-third of Lebanon’s population died at that time from famine and plagues. On May 6, 1916, the Turkish authorities executed 21 Lebanese and Syrian leaders in Beirut for alleged anti-Turkish activities — most of which were journalists. May 6th is still commemorated as Lebanon’s Martyrs’ Day until today.

Following the collapse of the empire after World War I, Lebanon came under the French Mandate until its independence on November 22, 1943.

At different periods of its history, Lebanon has come under the domination of different civilizations, each leaving its prints on its culture. Although often conquered, the Lebanese take pride in their rebellions against despotic and repressive rulers. Today, Lebanese cherish their cultural riches, and Lebanon is embraced for being the land of the world’s greatest civilizations.