The reason I have taken part in the Humphrey Seminar and the reason that I have studied abroad three times in my career at ASU, is that I have a passion and longing to work in the world at large.

There is something liberating about breaking out of the echo-chamber we suffer from here in America — and to expand my horizons to see things from a different point of view. But in recent weeks I have started having conversations and taking a real look at the costs and benefits of working abroad.

The first time I seriously considered it, was when I was studying abroad in London and heard the fantastic story of Cronkite Alum Samuel Burke, who is a producer for CNN International in London. He, just a few short years earlier, had been studying at the same school I was studying at. The familiarity made what was once a far-fetched dream, an achievable reality.

Later that summer I took part in a deeply immersive experience as a participant in the Israel up-close graduate-level program, which was designed to give young reporters a taste of working as international correspondents. I again got to meet a Cronkite alum who went on to work as an international correspondent. This time it was Ian Lee, the CNN correspondent who was at the time, based in Jerusalem and had just moved from his post in Egypt. The dream was becoming even more real.

In recent months, and through this program I have talked with a lot of people who have reported from all around the world. Some told me that it was a bad idea to give up the ease and to vacate the importance of the stories I have to report in my own country. This gave me pause when thinking about what it means to report and live abroad.

I also watched Anand Gopal talk about the dangers and hardships of working abroad, especially from his unique and sporadic path to reporting in Afghanistan from a non-reporting background. He cautioned to the reporters in the room, not to do what he did. These warnings conflicted with the idealistic view of working abroad I had in my mind — one that was influenced by the great war reporters of Vietnam — and admittedly the moving Whiskey Tango Fox Trot about a quirky female war correspondent in Afghanistan.

The next person to talk about it was the 2018 Cronkite Award, Winner Anderson Cooper. He too talked about how he would not buy a ticket and fly to the war-torn zones today due to the heightened risk journalists face today of kidnapping and death.

But he hearkened down on a theme that he spoke of throughout his Q & A with Cronkite Students, which is to just go for it.

I am sure that his superiors at the time would have told him it was too dangerous to go, too illogical and not conducive to a successful career. 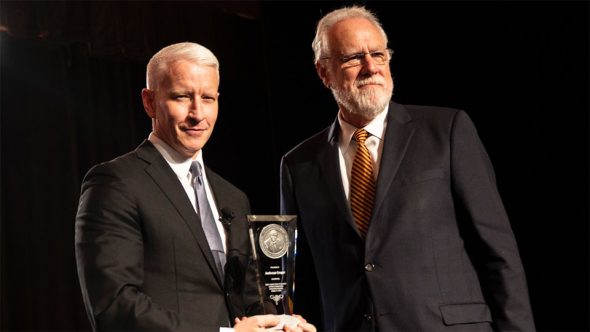 These experiences have given me a well-rounded look at what the future has in store for me, and this is only a small glimpse into the many many experiences that have shaped my global-minded approach to my career.

But as I near the end of my College experience I think these questions provide a needed and sobering pause to take an inventory on the real reasons I want to go abroad, and the goals that I need to outline before I thrust myself into the great unknown of foreign reporting.

I know that bringing the world to a local audience will always be a passion of mine and that finding the most voiceless and vulnerable will always be a calling that I yearn to answer — but I am now ready to refine and assure that the path I am taking is the right one.

View all posts by Isaac Windes →