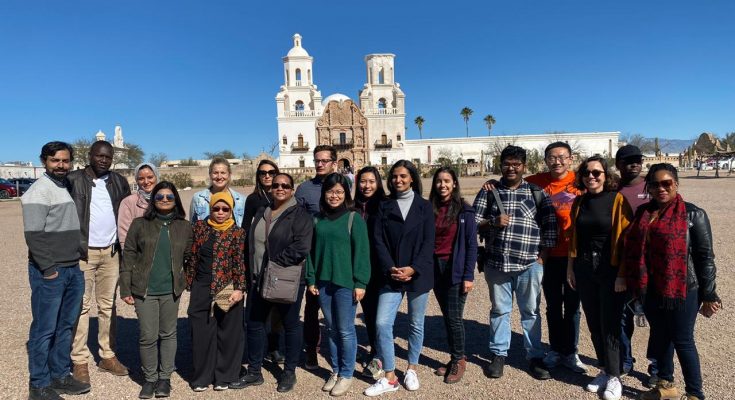 Phoenix, February 15, 2020. Humphrey Fellows from the Walter Cronkite School of Journalism and Mass Communication hosted Fellows from University of Minnesota during a two-day cross-collaboration event in Phoenix. From Feb. 6-7, the Fellows and several experts discussed issues related to immigration policy, border communities and the U.S./Mexico border.

Discussion with experts on U.S. policy regarding immigration and borderlands

The first day of the cross-collaboration, both Fellows from ASU and UMN attended talk sessions with experts in immigration policy, refugee trends and humanitarian issues. Angela Banks, Charles J. Merriam Distinguished Professor of Law, spent one hour with the fellows explaining the policies, procedures and institutions in charge of law enforcement regarding immigration and refugees. Through a Zoom call, Paige Corich-Kleim, media coordinator and volunteer with No More Deaths (a Tucson-based humanitarian organization) discussed the situation regarding refugees and asylum seekers in Arizona as well as the challenges her organization has faced to help migrants in need. Next, Greer Millard, communications manager of The Florence Immigration & Refugee Rights Project, spoke about her organization and their work of providing legal aid to asylum seekers. Finally, Dr. David Becerra, director of the Office of Latino Projects & Southwest Borderlands scholar at ASU School of Social Work,  ended the presentations by analyzing the nuances and ambiguities of U.S. Immigration and Borderland policy.

On Feb.7, the Fellows completed the cross-collaboration event by visiting Nogales, Arizona, a city paralleled by Nogales, Sonora, which sits on the other side of the U.S./Mexico border. They had a two-hour discussion with Jerry Carlyle, vice chairman of the San Xavier District of the Tohono O’odham Nation. Carlyle presented a diverse perspective of a Native American community that perceives and undergoes U.S. policy regarding immigration and borderland issues. The Fellows also visited the San Xavier Mission, a National Historic Landmark, founded in 1692. Its church, widely known for its ancient and well-preserved construction built in 1797, is considered the oldest intact European structure in Arizona.

The Fellows also met with Nogales’ Chief of Police, Roy Bermudez, with whom they discussed the security situation around the U.S./Mexico border. The Fellows had the opportunity to compare the national conversation and reality regarding the situation on the U.S./Mexico border, which is generally associated with violence, poverty, illegal immigration and illicit traffic. For instance, some fellows were shocked by the homicide rate in Nogales, which corresponds to one or two cases of murder a year, mostly related to domestic violence.

The trip to Nogales was a remarkable experience for many Fellows because they understood that the reality of borderland and immigration issues differs from what the media generally portrays. This realization was supported by the low homicide rate and the sense of community and friendliness the people in Nogales and Sonora share from both sides of the border, which contrasts with the narrative featured by some media.

Pierre Negaud Dupenor is from Haiti. He holds master's degrees in Economic and Social Administration, International Management of territories, and Social Communication. Between 2013 and 2015, he worked as a project coordinator in Haiti for the French nonprofit association, France Haiti Développement (AFHAD). From 2015 to February 2018, he was national communications officer for the UN Agency, FAO, in Haiti. In 2017, he played a key role in the creation of the Parliamentary Front against Hunger in Haiti (FPFH). Recently, he has been teaching at the University of Haiti State (UEH), and chairing the non-profit organization, Alter-Aide. Since February 2018, he has been working as a communication specialist for the USAID-funded project, LAC Reads Capacity Program (LRCP), and was recently promoted to deputy director. During his journey in the US, Mr. Dupenor expects to strengthen his capacities in Project management, International development and Communication strategy at Arizona State University (ASU).