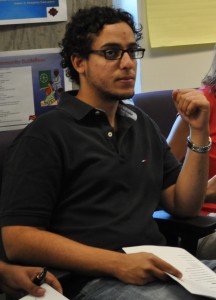 I just realized today how assumptions can ruin our lives. In the first couple of days, I assumed (of course you don’t require any logic, reason or permission to assume. You assume simply because you assume) that Yousef was very proud, indifferent and unfriendly.

I don’t know why but that is how I assumed and assumed (luckily not forever).

They say when you assume, you make an a.. of you and the others too!

Today, the same “assumed guy” helped in rescuing my sinking boat when I was on a deadline. I didn’t know the ABC of a software through which I was supposed to submit my assignment. I blushed for a moment while ‘assuming’ (in fact the right reason for making assumptions) how mortified I’d feel in front the whole class tomorrow without having done the first assignment.

And there came Yousef.

I am walking elatedly to my class room.

The moral of the story: Discard the immoral thing: Assumption.