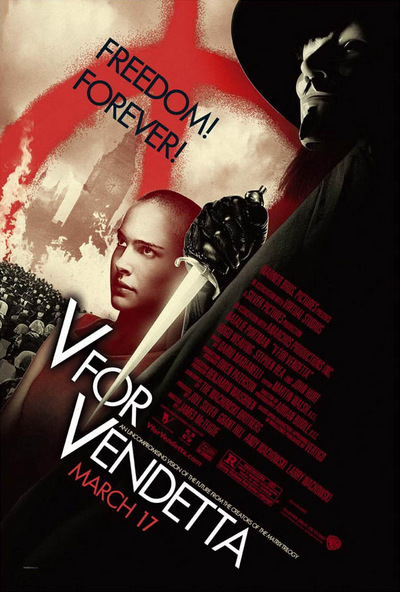 V For Vendetta is a fictional story set in a post-modern England about a futuristic government that has taken complete control over its citizens, ruling with an iron fist. The high chancellor Adam Sutler is the fascist dictator in charge, a horrible man who censors the people, depriving them of their freedom and using terror and violence to keep them in line and obedient. As part of his rise to power, he hired men to round up those considered to be less than pure in Nazi-like concentration camps, where scientists developed a deadly virus, testing it on those in the camps. One man escaped the testing as the labs were enveloped in fire, but the government’s testing was successful, allowing them to unleash it on their own people, plunging the nation into chaos. In that chaos, the people turned to Sutler as their savior before he enslaved them all and ruled with an iron fist.

Meanwhile, the man known as V, who escaped the camp and developed enhanced kinesthetic reflexes and strength, plots his revenge, waiting to kill the members of the political party responsible for all those atrocities. He blows up a political building, overrides the country’s rigged news station, and broadcasts a speech inviting the people to join him in a year to blow up Parliament. V adheres to his ideals of justice and freedom, but also uses his plot as a method of appeasing his vendetta. 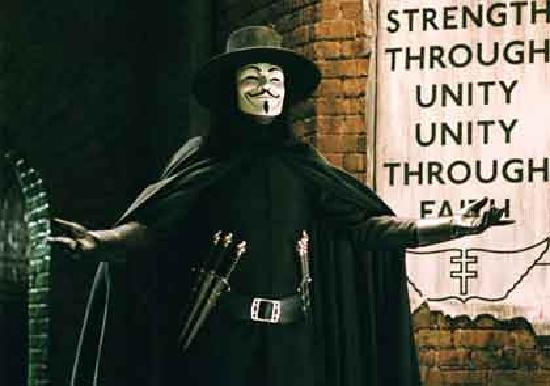 V is a servant leader who employs questionable methods for the greater good. The ends justify the means because of his tragic and horrific past. He is not a leader because of “listening, empathy or healing” which are key criteria in the bullet point “Reflection” under the category of “servant leader.” However, he does fit the other key criteria of conceptualization and foresight under that category. His precise planning in executing his master plan, even a plan of terror and violence, is perfectly carried out for the good of his people. He embodies an idea, despite the fact that his violent means make him a jaded and miserable person himself.

His integrity is questionable at times, but overall, V is extremely honest. His own values may require violence, but it is only to deal with the drastic tyranny and oppression of the fascist government that made him into a monster in the first place. Drastic times call for drastic measures, but V doesn’t want to take control of the country and he works alone, operating as a solo act to ensure he does not spoil anyone else. He is a visionary with a personal vendetta, but his actions are motivated by his desire for justice and freedom in his country. The third bullet point under “servant leader” is the one that embodies V the most: “passion.” V has an unfailing dedication to his ideals, so much so that he almost sacrifices his own humanity in order to protect and enforce those ideals on a dictatorship that censors its people and dominates them with a history of horrible experimentations, concentration camps, disease and war.

According to Likert’s theory of management styles, V is a participative leader. He doesn’t order people around, he doesn’t consult anyone in constructing his brilliant plan to put the country back in the people’s hands, but he lays all of the groundwork and eventually leaves the final choice of what to do up to one of the common people. He accepts that he must die as part of that old group of people involved with the tragic concentration camps, recognizing that a new generation will be responsible for rebuilding the country. He accepts that he is not part of this generation and that he does not want to take on any role of leadership. He is compromised because of his values and gracefully bows out, leaving the choice of whether or not his plan will be carried out to Evey, one of the common people who will ultimately be instrumental in reshaping the future. Technically, V doesn’t abide by a few standards of the participative leader. He trusts the people will join him in his stand against the government, but he operates alone for the majority of the time. Not because he doesn’t trust the people, but the only violence he wishes to incite is his own. In other words, the blood will be on his hands and the people will get to start over with clean hands if he does not directly involve them until the very end. V recognizes that while the act of blowing up Parliament could be symbolic and ultimately change the world, he leaves the choice to the common people, represented by Evey. V sacrifices everything in the name of the truths he believes in. He believes in free speech, freedom, justice and democracy, as shown best by his speech to the people. Despite his mistakes, his horrible past and his acts of violence and rebellion, V’s actions are justified in the end as Parliament blows up, the deranged party members no longer exist and the people get a chance to start over. V represents more than just a man; he is an ideal. This is why he is a true servant leader: he was willing to sacrifice everything and ultimately die for the ideals he lived by.

Sutler is the ultimate example of an exploitative, authoritative leader according to Likert’s Theory of Management Styles. He trusts no one (and for good reason, as he is betrayed by his second-hand man who similarly trusts no one), he is the only decision-maker, his employees work out of fear for their lives and he is condescending and hands down his orders with sarcasm and mistrust.

The film shows frequent scenes of Sutler meeting with his party members as they attempt to censor the “terrorist” V, who is trying to rally the people and get them to realize who bad things have gotten in their country on their own watch. Sutler’s men arrest, torture and kill dissenters, they censor free speech and they want complete control over their citizens, a point made clear throughout the movie. From strictly enforcing a curfew on their citizens to putting famous works of music, art, religion and even items of food like butter on a blacklist, Sutler rules over his people an iron fist.

In the end we see how much of a coward Sutler is facing his death as opposed to V, who greets it with open arms. Although facing death does not necessarily make one a good leader, it’s obvious how weak of a leader Sutler really is when it comes to anything other than enforcing his harsh rule on citizens through others. Sutler is pure evil in the way he set a disease on his own people and killed 100,000 of them, all for the sake of gaining power. 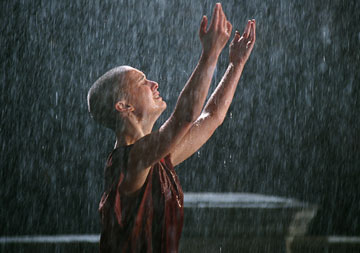 Evey is not really a leader in the traditional sense for the majority of the movie. But by the end of the film, she is the most important leader of all: a leader of the future. Like V, she is jaded by her horrific past, as her parents were basically killed by the government and her brother was one of the victims poisoned by the disease the government unleashed on its own people. She is captured and tortured by V, who makes her think she is being held prisoner by the government, which happens because she admits she wishes she wasn’t afraid all the time. V does a horrible thing in tricking her and torturing her like that, but Evey is ultimately stronger for it and comes to realize in a memorable scene that V’s ideals are right.

However, Evey differs from V because she never employs serious violence to achieve the goal of overthrowing the government. V’s sacrifice of taking all that violence for himself spares her, which is why V gives the ultimate decision of whether or not to blow Parliament to her. Evey went through the same torture in a concentration camp that V did but she didn’t hold the same vendetta because V spared her from that. Because she is jaded but not tarnished, she joins the rest of her people as an instrumental piece in rebuilding for the future.

Evey employs all three aspects of a servant leader, even if she doesn’t really lead throughout the movie. She listens to V’s tragic tale with empathy and ultimately finds her own personal healing in a memorable scene (“God is in the rain.”). Where she truly leads is when she decides to send off the train that will blow up Parliament. She has the integrity to act on what V and the rest of the people want by sending the train off, allowing her people to start fresh, free from the reign of Sutler and his fascist policies. She has the passion that V instilled in her, which is why she sends the train off in the end. So although Evey follows V’s lead for the majority of the movie, she ultimately makes the biggest decision of the entire film as the perfect leader of the people based on V’s higher ideals.