Our in-class discussion on ethics, new technology and the rise of mobile news on Monday reminded me of an interesting analysis I read a few weeks ago. After several big-time news stations spread misinformation with the break of the Sandy Hook Elementary School tragedy, Mark Coddington, a writer for the Nieman Journalism Lab, wrote an article exploring the issue of using social media to report “real-time” news. 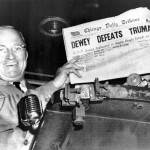 While some argue that breaking news has always been messy (take the famous “Dewey Defeats Truman” misprint, for example) and that social media reporting is no different, others are saying that the push to be first in the instantaneous world of social media is threatening the quality and truth of journalism.

In a particularly powerful quote, Eric Deggans of the Tampa Bay Times said that blaming the Sandy Hook mistakes on the stressful environment of being the first to report the facts “sounds like a forward-looking acceptance of social media’s impact,” but that it’s really just “embracing a path which could destroy the news industry.”

Unfortunately, I seem to agree. Time and time again I’ve read a tweet or Facebook post with breaking news only to find out later that the majority of the details were wrong or have been retracted.

Though social media and the rise of digital news has given us 24/7 access to an unparalleled amount of information, it’s also put an immense amount of pressure on reporters to be “first.” Deadlines now are measured in minutes and clicks, not hours and days. Now more than ever it seems reporters are sacrificing being right to be first. And can you really blame them?

So what can we do? Though social media should and can be utilized as a serious publishing platform, is there a way we can make social media reporting better? Should there be some sort of punishment for those who repeatedly abuse the facts? Or is this even an issue at all?