Many African Brazilians say that being in the U.S. has made a difference in their identity. I have experienced that in some occasions. For example, being in Atlanta for just three days was really impressive for me as a black person. Besides my professional interest there, I had high expectations in being at the home city of Martin Luther King and Coretta Scott. I chose go to The King Visitor Center  by foot through the Auburn Avenue, the well-known African American neighborhood  in the Historic District. My first look at “the richest Negro street in the world” disappointed me. The “Sweet Auburn” was a mix of poverty and abandonment; trash on the street, old buildings without conservation and agitated drug traffic. Had it not been for the road works, I would say there was a complete absence of public policy. I got angry and wondered how it could happen to this very important historic place. Then, I tried to see beyond all those things and find what I went there to seek for. 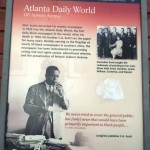 I passed by the African American Panoramic Experience – Apex Museum, but I couldn’t stop and get in. I walked down and found other signals of civil rights, which expressed pride in being black, in the people style, graffiti in the wall. And it was on the wall that I found out a little more about African American Press. Atlanta had two newspapers specialized in covering issues that affect black people: one was The Independent  that finished running in the 1930s and the Atlanta Daily World, the first daily black newspaper in the world, whose old building I was in front of. Despite its questionably timid participation in the civil rights movement, that newspaper was the most influential in that part of U.S and gave another presence for black people outside of police pages. Founded in 1928, Daily World has online and weekly print versions and continues to highlight African American matters.

When I finally arrived at The Martin Luther King, Jr., National Historic Site, I met many people from different parts of U.S. and the world; families, young people and, particularly, my attention was called to an Asian group of about five people. I watched how they carefully visited each section of the site. I could measure the impact of Dr. King’s message, an advocacy for equality beyond race.

At night I had a surprising African party, “Spread love, Felabration – Sixth Annual Tribute to Warrior Poet & King of Afrobeat”. First of all for you to understand, Fela Anikulapo Kuti  was a Nigerian musician that fought for the independence of his country and dignity for his people. Fela, educated in London, also discovered Africa away from home, inspired by Dr. King, Malcolm X, the Black Power movement and Black Panther Party. To know more about him, I recommend this interesting Documentary: Fela Kuti, music is the a weapon.

Felabration was described by my colleague Steven Kapoloma from Malawi as “Awesome, the best social event I ever had in America”. I agree. The party showed up a diversity of African Americans with strong roots, awareness and power. For me it was not only a party, a celebration; it was a manifestation of brotherhood and identity fundamental to nourish the struggle for equality and respect for our history.

Special thanks to ‪Eboni Lemon, @Kiratiana,  Shauna Stuart for the opportunity to explore that side of Atlanta. I also thank you,  John Crooms and Carlos Bell for the pictures of the party.