I really appreciated Aaron Brown’s dynamic presentation today, especially his talk on Walter Cronkite, which was especially fitting, as today is Walter Cronkite’s birthday. I think that he was absolutely right that a lot of the time we see Walter Cronkite as a lost historical figure that has been placed on a pedestal. It was a nice change to hear some personal stories about Cronkite and hear about how he influenced Brown’s career.  I especially liked how Brown described the first time he met Walter and how he said hearing his voice was “just one step down from hearing God talk to you.” I think it’s interesting that Cronkite’s voice has become so iconic and it was fun to learn that as Brown said, “Walter always talked like Walter.”

I also appreciated how Brown shared his views of Walter growing up and how when Cronkite delivered the news of John F. Kennedy’s assassination he told his mother that Cronkite’s job was the one he wanted. I was also inspired by his determination and how he said it never occurred to him that he wouldn’t have Cronkite’s job, even when other people didn’t necessarily see things the same way. That determination did him well as he did achieve his goals and had his own “Kenndy moment,” as Cronkite described it to him after he covered the 9/11 tragedy successful and established himself as a great journalist, in the same way Cronkite had when he delivered the news to America that Kennedy had been assassinated. Despite his influence on Brown’s career I appreciate his humility when he said he did not want to be compared to Cronkite and that Walter is in a class of his own. 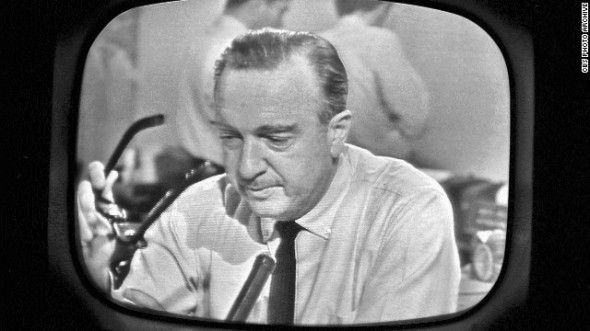