The bombing shocked the world in general and American nation in particular. There were many reasons – it came as a highly unlikely attach since security agencies just swept the areas and announced that everything was safe; it happened at the most photographed spot at that time in the entire world and the bombers clearly expected to get away with it without even having a solid escape plan.

All these things coupled with real time updates on twitter in particular and media in general kept people glued to their TV screens and gadgets.

It was a time when social media’s ability to transmit information entered a new territory but for television the rules remained the same especially the rule of breaking the right news. 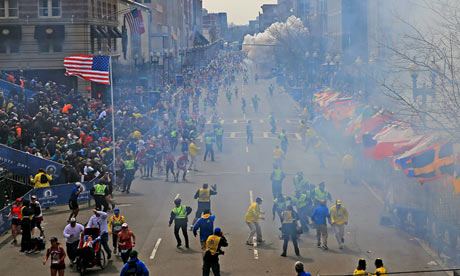 The bombing happened on Monday, April 15 2013 by Wednesday, April 17 the law enforcement officials started looking for possible suspects. CNN broke the storyofa man identified and arrested as a suspect. It later reported that the suspect was dark skinned male.

The news turned out to be false. CNN corroborated the facts and corrected the story after almost an hour. But an hour was enough to make CNN’s standing, as a leader in news business, questionable. CNN and the news anchor – John King – who broke the story, had to face a huge criticism from various media organizations and audiences.

New York Times ran an article, ‘The Pressure to Be the TV News Leader Tarnishes a Big Brand,’about viewer’s disappointment and repercussions (for CNN) of the story.

“Still, when big news breaks, we instinctively look to CNN. We want CNN to be good, to be worthy of its moment. That impulse took a beating last week. On Wednesday at 1:45 p.m., the correspondent John King reported that a suspect had been arrested. It was a big scoop that turned out to be false.

Mr. King, a good reporter in possession of a bad set of facts, was joined by The Associated Press, Fox News, The Boston Globe and others, but the stumble could not have come at a worse time for CNN. When viewers arrived in droves — the audience tripled to 1.05 million, from 365,000 the week before, according to Nielsen ratings supplied by Horizon Media — CNN failed in its core mission.”

TRANSCRIPTION OF THE STORY

“I have been told that there has been a breakthrough in identification of a suspect. I am told, I will be very careful about this because people get very sensitive when you say these things. I was told by one of these sources, law enforcement officials that this was a dark skinned male. The official usedsome other words. I am not going to repeat them until we get more information because of the sensitivities. There are some people who would take offense even in saying that. I am saying that this is relayed to me by a reputable law enforcement source…”

It is clear by King’s words that he is trying to show some kind of restrain; he has withheld some information but what information? CNN or John King did not disclose it. A bigger question is ‘why he did not opt to hold back the part of ‘black skinned male’ with other information that he opted not to including in his breaking news?

It is clear in the video that King is not comfortable but as an experienced reporter showing this kind of discomfort while also choosing to use racially inflammatory categorization, which also happens to be unhelpful in every possible way.Why King did not wait until having access to visuals of the suspect? Although John King in the following week responded to the criticism, details in the following passages, he did not address this particular part of the issue.

CNN is an inherently cautious organization because it enjoys certain credibility and reputation; it is seen as a leader in the news business. This report puts a big question mark not just on the chain of command inside CNN’s newsroom, John King and their news sources but also on CNN’s overly cautious policy.

Brown explains that reporters more than often collect news from sources who are not journalists and in situations like Boston Bombing they tend to get emotional or excited or even panic. This is the reason why most first reports are almost always wrong.

This is the inherent nature of breaking news no presenters/reporters can claim that they have always been right or they never broke a wrong story, everyone at least once in their career goes through this kind of unfortunate situation. It can be a humbling experience.

In the following week, John King reacted to the criticism in an interview with a radio station based in Washington DC. He said:

“Well I was involved in that. It’s not walking back, it’s correcting it. You have to do that, and it’s embarrassing,” King said. “I’ve been at this for nearly 30 years gentlemen. I’ve covered a couple wars and a lot of breaking news and a lot of cops-and-robbers situations. I’ve got a pretty good track record, but when you do something like this it’s embarrassing.

The bigger part, beyond being personally embarrassing, is it’s tough for your viewers, who you want to trust you,” he continued. “So the one thing you do have to do is look in the camera and say, ‘We were wrong,’ and try to explain why we were wrong. In this case we had two reputable sources — one of mine, one of a colleague’s of mine — who have been reliable in the past, who simply had bad information. We had two — you never do that with one — and we went with it, and we had to correct it.”