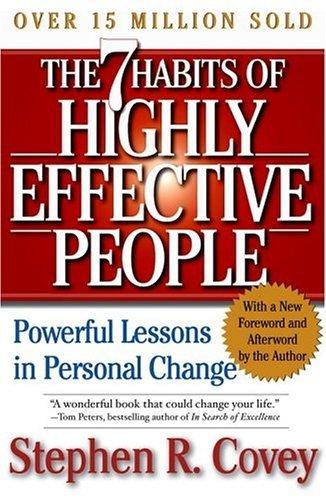 To begin, I will say I thoroughly enjoyed reading this book and found it to be full of sound and logical advice. I would recommend it to anyone because I feel that no matter how great a leader or person, nearly anyone could find something to to take away any apply to their lives from this book. The book is based on the idea that many people seek to improve their lives by changing their personality or by changing their approach to communicating with others but the book’s author, Stephen R. Covey states that these changes will not be effective if a person does not have a good character.

The first three habits outlined focus solely on individual growth and change. The first habit encourages the reader to embrace self awareness and take responsibility for their own life. The second habit emphasizes the need for personal values and a direction in life to base everyday decisions off of. Covey argues that these values need to be the center of an individual’s life, not family, money, religion or anything else. The third habit takes the second a step further by encouraging the reader to schedule what relates to their values into their week, prioritizing what’s really important instead of just handling crisis after crisis. He believes that by prioritizing what matters fewer and fewer emergency situations will arise.

The next three habits are geared toward relations with others. The fourth habit is to think “win /win” when making decisions by others. This means that instead of seeing a situation as one person wins, one person loses to think creatively until a solution arises where both parties benefit. Covey encourages the reader to not make a deal at all if the deal isn’t a “win /win.” This concept applies to family, friends, and business relationships. The fifth habit is to listen empathically and to attempt to understand others before expressing your own views. This requires real listening and a desire to understand, instead of just a desire to be understood. Once the previous habits are mastered Covey states that the final habit, synergizing, is possible. Synergy, according to Covey is the highest form of communication that yields the greatest results through an open exchange of ideas and respect among individuals. The final habit is renewal, which requires preservation of the individual’s physical, emotional, mental, and spiritual well-being.

Overall, this book presents suggestions that have the ability to positively impact an individual’s personal and professional life. The content is straight forward and interesting to read as Covey not only shares philosophies and scientific fast but also his own personal experiences, both successes and failures.

One Comment on “Seven Habits of Highly Effective People”