The word persuade is linked to the art of influencing someone to do or go the way we want, it is way to reach our goals with the help of other people. That means to possess features that can help you to get the attention of the people whose help is needed. Of course, to me, being able to influence people requires you to be charismatic, trustworthy, honest, show evidence of courage, and have good body language in addition to one’s art of speaking. Getting people to do what we want requires these skills and there are numerous examples to support this thesis.
Martin Luther King Jr. was a very good speaker – charismatic, and all the qualities cited earlier. So was Mahatma Ghandi, Nelson Mandela and so on. People need to be confident of the fact that they won’t be betrayed, that they can really rely on the speaker or leader to be supportive in any case, for what they could even sacrifice their life to fulfill the task. That requires persuasion as well some leadership skills. When you are in a ship in distress, if a commandant cabin crew or a one of his sailors do not trust him to do right things, they might take different decision on they own to their loss. But at once the commandant takes care of his delivering, in his way of speaking to his men, behaving on right ways no matter the relentless issues occurring on the sea, showing evidence of knowledge and authority being inventive, he is likely to get all his request fulfilled by any one he addresses. That means to me, a long life habit of doing things on right ways and working to stay as honest and trustworthy as possible, so that, from your background and daily life anyone cannot deny your leadership and abilities of achieving goals no matter the issues encountered. 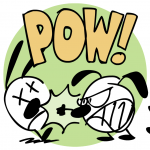 When you work on your character and have the feeling that it’s all your best you do to move forward, you are likely to be successful every time because all the issues you will be facing will be solved by that strength. The same goes for when it comes to convincing people to do things: Your character-based principle and your rhetoric makes your charisma and trustworthiness shine on people you are talking to, and of course they will be more likely to listen and more to act in your favor.
It is a matter of who you are.
As said John Wooden in his book WOODEN ON LEADERSHIP, “Be more concerned with your character than your reputation, because your character is what you really are, while your reputation is merely what other think you are.”

Aristotle seals that principle by the powerful following statement: “Character may almost be called the most effective means of persuasion” in his “RHETORIC”. That is what I believe in the most.