When I was a younger I was always the kid that adults said had an “old soul”.  I never had a problem finding my voice. I was that confident kid who had no problem talking to adult and even preferred it to playing with other kids.

That is the point of this story. Many people think that it is so important to be professional when meeting people and networking but, I think that the key to successful networking is to make a genuine connection with people. Let down the professional guard, be yourself, be honest and connect with whomever you are talking to on a human level.

The Boston Business Journal put out a list of networking tips and the first one is very similar to my tip: 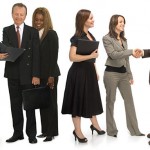 Check out the Boston Business Journal’s other tips!

View all posts by Sophia Mayberry →