The 2014 State of the Union address given by President Obama is not one we haven’t heard before. Essentially he has had the same platform since the beginning of his presidency: immigration, healthcare reform, gun control, employment and income equality and so forth. This is important for consistency and for continuation until total change has been seen. However, it never ceases to catch my attention when a high officer calls to action the pathway for women. 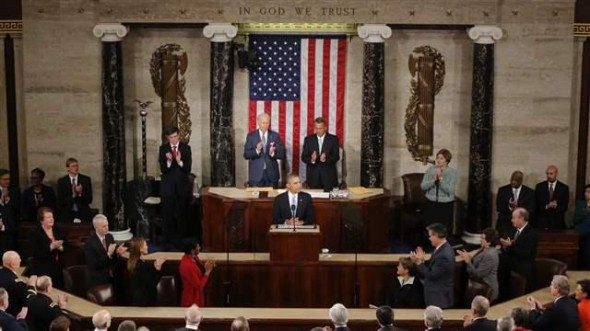 As a student, I will soon be tackling a role in the work force and it would be incredibly discouraging to know that no matter my amount of education and working ability, I would still be getting paid less than a man in my position. Equality for all should actually be “for all”.

In the beginning of his speech he recognized the First Lady, Michelle Obama, for all of her efforts. As a women, a mother, and the wife of the president she has implemented programs against childhood obesity and for support for military families. He used her as an example for all hard working women.

Women can create change and women have their own personal touch that cannot be duplicated by a man.  Yet, “today, women make up about half our workforce. But they still make 77 cents for every dollar a man earns,” President Obama said.

He said, “If you work hard and take responsibility you can get ahead in America.” That is what the land of opportunity is supposed to be like. So let us remember that President Obama’s first bill signed was a bill that made it easier for women to sue against unfair pay.  He has been avid about equality of men and women in the work force and regardless of political preferences; he does speak strongly on our behalf. Let 2014 be the year women embrace “getting ahead in America” and let the hard workers be rewarded for their efforts not for their gender.

View all posts by Shirin Ahmadpour →