Just several days after Obama delivered his State of the Union speech, reactions to it still do not swoon. In the “year of action” as Obama called it, with or without Congress agreement, his message was aimed to the middle class Americans – increasing minimum wages, reducing inequality, immigration reform, empowering women, Affordable Care Act, etc.

His speech was passionate, overweening and confident. I guess that it doesn’t come by surprise that as a woman my favorite part was his elaboration on the importance of women in the labor force boosting the economy. 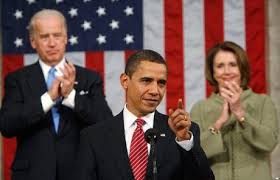 “Today women make up about half our workforce, but they still make 77 cents for every dollar a man earns. That is wrong, and in 2014, it’s an embarrassment. Women deserve equal pay for equal work.”

I was also happy when he touched upon an issue of a working mother and struggles they are facing on a daily basis to provide for their families.

“You know, she deserves to have a baby without sacrificing her job. A mother deserves a day off to care for a sick child or sick parent without running into hardship. And you know what, a father does too. It is time to do away with workplace policies that belong in a “Mad Men” episode. This year let’s all come together, Congress, the White House, businesses from Wall Street to Main Street, to give every woman the opportunity she deserves, because I believe when women succeed, America succeeds.”

After these words, I felt relief, as finally somebody said it out loud! This is a reality around the world, but nobody talks about it or let alone try to balance it. American reality is that 42 million women and their 28 million children, live on the edge of poverty.

Sabrina Jenkins, an Air Force Veteran, who sat next to First Lady, Michella Obama, spoke out about how it is to be a working mother.

That’s why I applauded president even more when he said:

“Women hold a majority of lower-wage jobs, but they’re not the only ones stifled by stagnant wages. Americans understand that some people will earn more money than others, and we don’t resent those who, by virtue of their efforts, achieve incredible success. That’s what America’s all about. But Americans overwhelmingly agree that no one who works full-time should ever have to raise a family in poverty.”

Thank you President Obama for acknowledging women and putting their issues front and center!