I must be honest and admit that when I first learned of the planned Borderlands trip to Nogales, I wondered how and why such a trip could be relevant to me. I wasn’t studying human rights or much of a social activist. Skeptical about the value, I chucked it up to simply a fun day out with fellows, to see another part of Arizona and Mexico.

It didn’t quite start off as fun though. While I am usually an early riser back in my home country of Trinidad & Tobago, I discovered that a 4:00 am wakeup call is more difficult for me to pull off in the US. Admittedly groggy and grumpy due to sleep deprivation, I found a spot at the very back of the bus, and tried to catch up on sleep for most of the morning journey. So sadly, the visits to the Mission San Xavier del Bac and the Tohono O’odham Tribal Nation are blurry. I barely remember anything prior to the arrival at Pierson Vocational High School. Here, I was pleasantly surprised to meet the Public Diplomacy Officer at the US Consulate in Nogales, Sonora, Mexico, who served a two-year term at the US Embassy in Port of Spain, Trinidad. As I introduced myself she gave a little cheer when I mentioned my country of origin, and I felt the 4:00 am awakening slowly becoming worth it.

On a more serious note though, the greatest value of this trip for me was the shattering stereotypes and arousing of awareness on immigration issues.

According to 2007’s Migration DRC data, the US is a principal destination for almost 61.5% of Trinidad & Tobago migrants. I remember, not so long ago, the snaking lines around the Embassy in Port of Spain as people queued earlier than 4:00 am for a chance of an interview with a Visa Officer and that “golden ticket”. Because of the high denial rates, Immigration and Visa Officials quickly developed a bad reputation. In 2010, the Embassy shot into the local media spotlight as public concerns grew about the denial of visas to T&T citizens and many applicants vocalized feelings of  being unfairly treated, even victimized. These sparked discussions between the US Ambassador and T&T’s Government focused on addressing the challenges faced especially by students, individuals seeking specialized medical attention and business people, and the need for more transparency in communicating the reasons for visa denials. So, against this backdrop, it was an interesting experience to interact with the US Consulate Official and Customs and Border Protection Officers. My exchanges with such personalities in the past were always very formal, and I was uptight and anxious, as my entry into the US for business or pleasure hinged on their approvals. For the first time, there were no cages, no booths or barriers separating us, and we enjoyed pleasant, relaxed dialogue. 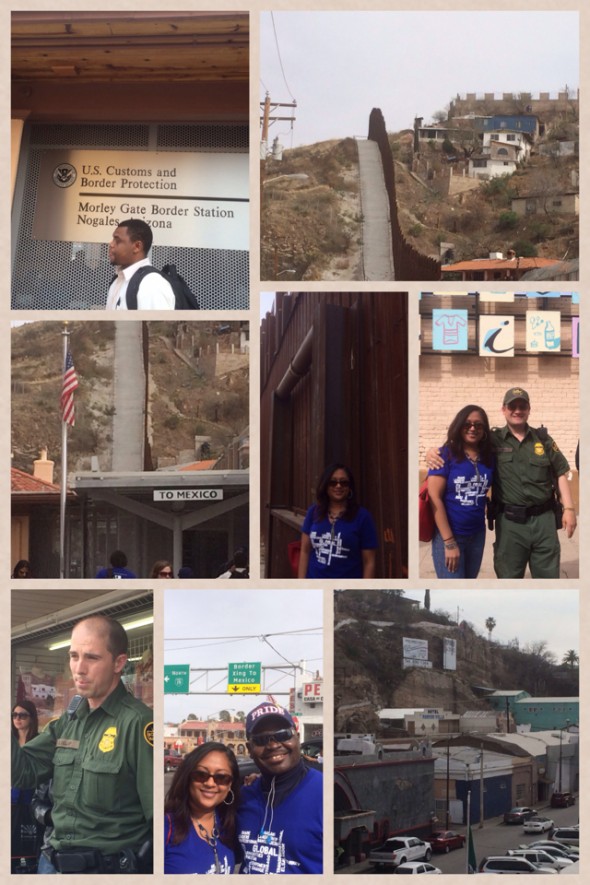 From the insights shared by the Border Patrol Officers, one surprise for me was to find out that a large portion of the 1969 mile-long US-Mexico border is not fenced. I had always assumed every part of it was solidly protected and guarded. In actuality, some parts are open, while others are heavily reinforced, and resistant for different purposes – some barriers intended to stop vehicles, others to stop people. At the same time, a major misconception was about the US’ openness to welcoming business from Mexico. I imagined it was always a hostile situation, where the US preferred the Mexicans stay on their side, but that wasn’t the reality. Notable though was the dilapidated state of the border town. In many respects, it didn’t look like the idealized America that we see on the TV.

Another concept that I held was that the border issues were primarily about people trafficking. But I learnt that the drug trade was the larger issue; a similar situation to my region. Our proximity to Venezuela has made Trinidad & Tobago a main transit point for moving drugs out of South America to the US and Europe, with resultant spikes in violent crime and drug-related gang activity in T&T.

The final stereotype that the Borderlands trip erased was my perception that it was strictly Mexicans crossing the border illegally. In truth, a large proportion of the undocumented come from other Central and South American states. Again, I drew parallels with my homeland. Trinidad & Tobago is one of the main receiving countries of Caribbean migrants especially from Grenada, St. Vincent and the Grenadines and Guyana.  It is also a transit point for migration to countries such as US, Canada or the UK. I saw many similarities with the US in terms of T&T’s pull-factor for migration especially labor migration, given its high level of development, urbanization and employment opportunities compared to other Caribbean states. There was also the likeness with Mexico as a transit point for passage to other countries.

As the representative of the Santa Cruz County Sheriff’s department spoke about the services and protection of the basic human rights of the undocumented, I wondered how much effort was placed on such issues in T&T. What were the conditions endured by undocumented migrants, especially women and children? I wasn’t informed enough and it prompted me to research. I learnt that alarmingly, my country is a destination and transit country for human trafficking networks with women and children trafficked for the purpose of commercial sexual exploitation. In some instances, women and girls from Colombia, Venezuela, Guyana, Suriname, and the Dominican Republic have been identified as trafficking victims in Trinidadian brothels and casinos. Reports also suggest that men from China and Guyana are also trafficked for labor exploitation in construction and other sectors in Trinidad & Tobago.

No one is more surprised than me, that a trip that was initially devalued as a social outing could morph into such a perspective-changing experience, opening my veiled eyes to consider related issues in my home country that I’d not paid mind to before, and provoking investigation into what response strategy is needed for us to treat with such critical matters.

After writing this reflection, I discovered this fascinating Borderland piece by NPR which documents a two-week experience driving through the US-Mexico borderlands and the narratives of the people and the journey of the crossing. I invite you to take a closer look at the stories which include fence facts and why the border is where it is, as well as more chilling accounts of endurance and survival. Hopefully it will shatter some stereotypes for you as well.