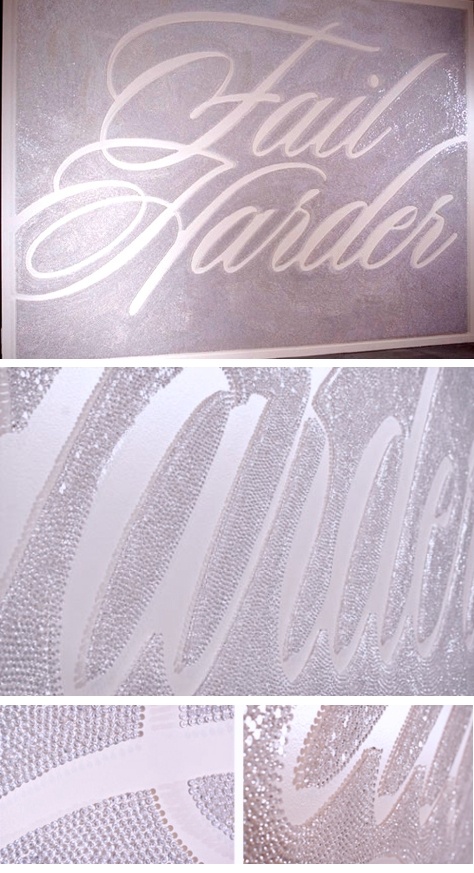 For a self-professed overachiever, the mindset that “Failure Is Not An Option” was pretty much engraved on my psyche. A series of brief encounters however put a different perspective on failure and sparked a new thinking.

It began with a weekly Toastmasters meeting a few Fridays ago. One speaker delivered his inaugural Icebreaker speech focused on his mission to fail harder and push further. Taken aback initially, I thought to myself “who intends to fail?” But by the end of his five-minute talk, I had experienced an Aha moment. He shared the concept of the Fail Harder Wall – 119,000 plastic pushpins tacked to a wall at Wieden+Kennedy’s headquarters in Portland which spelled out this advertising agency’s mantra: “Fail Harder.” Even after our meeting ended, I couldn’t stop thinking about it. I was curious to find out more about this organization whose core value is “to not be afraid of failure, but rather to embrace it.” This Ad Age article gives a good context on the Agency Founder Dan Wieden’s journey to conquering his fear of failure.

Then Dan Gillmor, founding director of Knight Center for Digital Media Entrepreneurship and Kauffman Professor of Digital Media Entrepreneurship at ASU gave a guest lecture in our Humphrey Seminar on Failure in the Context of Journalism and Media. He opened with the statement that failure is part of a process, a prerequisite for doing something good, and so failure was not necessarily a bad thing. He went on to cite several cases – from the failure of the Apple Newton device, to the Dodgeball SMS platform and Cue Cat barcode reader – which were all precursors to game-changing technological developments. Gillmor also shared some powerful personal lessons on failing. These resonated most with me. I call them the 8 Quotable Quotes:

I seriously began to wonder if the topic was following me around as failure rose to the fore again. This time at the Clinton Global Initiative University (CGIU) hosted at ASU. In a session titled Coming in Second: Scaling What Works, moderator Chelsea Clinton asked panelists the question “Where did failure help you or your organizations learn something along the way?” The consistent message in every answer was that there were critical lessons in failure experiences. This was reiterated at CGIU’s closing plenary, during Jimmy Kimmel’s interview with the Clinton family. As she reflected on her defeat in the presidential nomination campaign, Former Secretary of State, Hillary Clinton made a potent contribution. “Failure is often the best time for you to learn about yourself” she said.

These three encounters pressed me to reevaluate my outlook on failure. They forced me to reflect on my own disappointments and find moments of truth in every one of them. As I studied them through different lenses, I was surprised to discover points of learning, growth and development in each one of my failures. In many ways it was liberating to be able to face and embrace what I feared.

Now I am changing my mindset. As Mythbuster’s Adam Savage aptly puts it “Failure Is Always An Option.” Watch his talk below.