”Daughter of Destiny,” which is titled ”Daughter of the East” in its British and Pakistani editions. It is a polemic justifying her father’s life and her own career, as well as a fierce, firsthand indictment of human rights abuses under General Zia’s martial law. And it offers a fascinating look at a Western-educated politician promoting democracy in an Islamic country with a history of military rule. At age 35, just seven years younger than Pakistan itself, Ms. Bhutto has had a life of high drama and deep paradoxes

Ms. Bhutto’s story, written with an uncredited ghost writer, ends abruptly in November 1988, just before the elections that made Ms. Bhutto the 11 Prime Minister of Pakistan. She Stopping there, she avoids discussing the urgent issues she now faces, incl 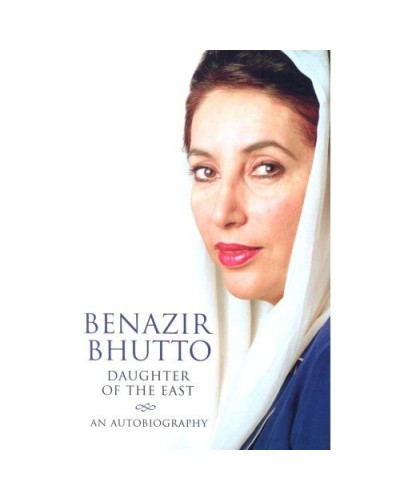 uding a collapsing economy strained even more by the thousands of Afghan refugees in her country. Instead, she recalls her father’s legacy and her unquestioned role as his political heir.

Even when describing her carefree childhood, Ms. Bhutto never lets us forget martial law. She looks back at her youth in chapters that situate her under house arrest in her family’s country home. The oldest of four children in the wealthy Bhutto family, she was given the delicate nickname of Pinkie.

While she was still at Radcliffe and Oxford, her father was offering political pointers. In 1971, when the United Nations tried to settle Pakistan’s war with India, Ms. Bhutto recalls her father asking, ”Do you think Pakistan will get a fair hearing at the United Nations?” Her instant reply was, ”Of course, Papa.” ”You may be a good student of international law, Pinkie,” he said, ”but you don’t know anything about power politics.”

The preface of the book is dominated by the emotional and sentimental expression by MBB. Though there is a comprehensive debate on the local, national, regional and international socio-economic and political issues but every time the pen or the though of the writer goes to the points of emotional miseries and sentimental exploitation done by various forces to her.

She is very bold in her preface; very courageous while talking about how even her pregnancy was exploited as political tool against her during the elections of 1988 and second time during her Premier Ship by the IJI.

She is very brave while she narrates that how rigid and anti-human tactics used by military dictators, anti women mindset and the agencies like MI and ISI to break her moral and political valor.

I would highly recommend this book for young women leaders to read.