There are so many aspects of negotiations, such as culture, power, ethics, communication, information, but I’ve never consider time being one them. I became aware of the importance of time in cross-cultural international business negotiation (IBN) during enhancement workshop “Strategic negotiation skills” held in Washington, DC and facilitated by Humphrey alumna Shanta Nagrendam. 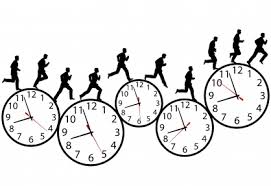 Why is time so important in IBN? Time influences punctuality at the meeting and the pace of negotiations. For IBNs it is crucially important to understand cross-cultural differences regarding time perception.

The first, M-time cultures concentrate on one thing at time in a clear timeline; they set deadlines, schedule meetings and agendas weeks in advance; they value punctuality and being late for meetings is insulting and disrespectful. M-time culture is represented in countries such as USA, Germany, Switzerland, Scandinavian countries, Western Europe, Singapore etc.

On the opposite side, P-time cultures, prefer doing many things simultaneously, by the order of their preference, without advance planning; they put emphasis on people rather than the deal itself. Countries belonging to this time category are all Latin American, African, Eastern European countries, South East Asian etc.

When M and P-time cultures negotiate between each other, frustration and irritation are common feelings on both sides. People coming from M-time cultures expect meetings to start and finish on time, whilst P-time people will change plans and agenda according to the daily events. The other side will find it irritating, and P-time people will find them to be too rigid and pushy.

Understanding with whom you are dealing with, can save you time and energy in negotiations. In that respect, researchers from Chinese Shandong University suggest several tips for IBNs regarding time in negotiations: